Coprinus comatus (commonly known as Lawyer's Wig), is from Family Coprinaceae. It is a common fungus found in bare soil, grass and mulch, either singularly or in groups.
A tall cylindrical whitish cap, covered in brown-tipped white scales, sits atop a white, erect, hollow stem up to 150mm high. The cap often widens to bell-shaped with maturity. There is a white, moveable ring low on the stem.
Gills start out cream, turning pale brown, then very quickly blackening, and liquifying to a black slimy patch on the substrate.
A fresh specimen of Coprinus comatus 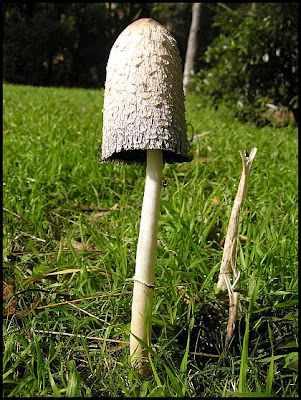 A close-up showing the shaggy cap and the size 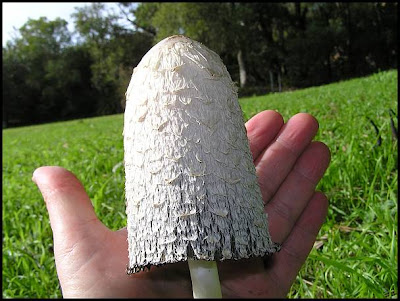 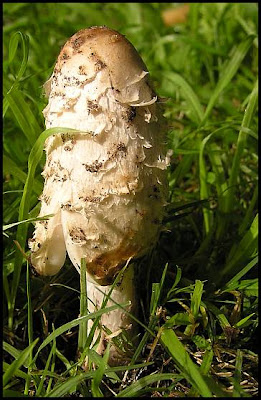 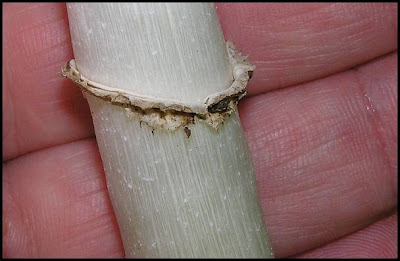 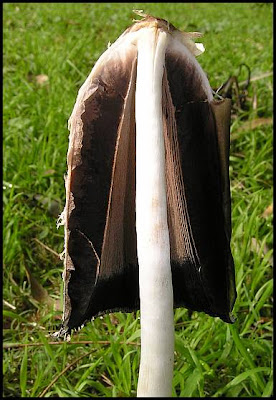 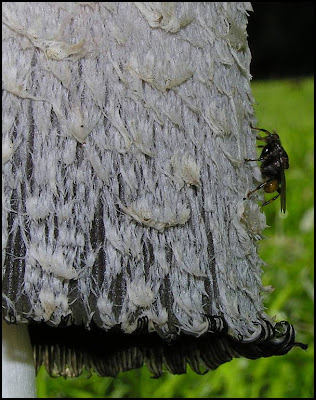 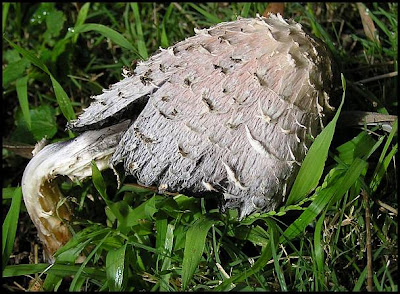 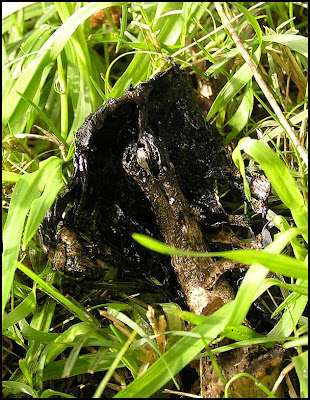 . . . . . until all that remains is dismembered stems and a black mess on the substrate (Note: the liquification decomposition is a swift process of only a couple of hours) 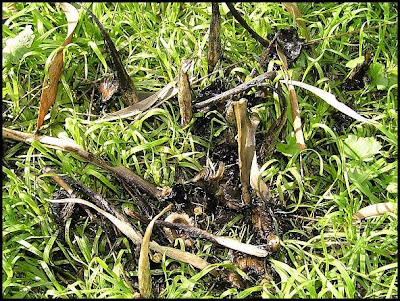 Australian Wetlands (Shortland) - Jun 2009
Note: This fungus is reportedly edible before it begins to liquify, but as I am not at all adventurous in cooking and/or eating wild collected fungi, I am unable to testify to its palatability. If readers who have eaten Coprinus comatus would like to leave a comment regarding this, I would be most appreciative.
Here is another of my life-cycle study entries
of a Coprinus species:
Coprinus cinereus
Posted by Gaye at 1:26 pm

Known to me as the Shaggy Cap fungus,I have eaten this fungus cooked in butter, but cannot remember the flavour other than being impressed it was quite palatable, which at the time was a surprise as I'm not normally keen on mushrooms. Provided it is eaten before it starts turning black, it is quite safe.

I tried some on toast a couple of weeks ago and can report that they were quite delicious.

Hello Birdlover and Anonymous, thank you both very much for sharing your experience with eating Coprinus comatus - it is indeed interesting.

I saw one this year, but it had dissolved before I could get back to photograph it.
One of the fastest fungi to break down (except perhaps for Slime Moulds).
A lovely study.
Denis

Great pics and commentary!
I'm very new to fungi spotting and trying to ID something from a book with one pic of one stage of its life cycle is not always easy.
Your complete life cycle pics are fantastic!!! Thanks!

I have had two species of Coprinus growing in my last garden that decompose so swiftly that I got up through the night to photograph a new one, and then got out again at day break to photoghraph it before it collapsed. That is part of the appeal of the Coprinus for me - it is a challenge to get photographs of all stages of growth and decomposition.

thank you, and I am pleased that you enjoyed my entry on this interesting fungus. I am currently trying to do a life-cycle study on a fascinating new (to me) stinkhorn fungus - I intend to get out through the night tonight to spy on it, and again at dawn, so watch this space :)

Fantastic post, thankyou very much. I love the photos and am looking forward to coming back to visit again!

thank you, and following your link, I have thoroughly enjoyed quickly browsing your blog. I intend to get back later today and catch up on many of your posts - what a breath of fresh air! I will link your blog to my other favourite blogs on my journal blog.

I intend to try to keep regular entries coming on my Fungi Blog - I have so many observations and photos to share.

My cold and dark vigil last night included a 2am and 6am dash around the old leafless tree out in the front yard to check out a you-beaut stinkhorn fungus, but alas, it is still tucked up inside its egg.

Thank you for taking the time to leave a comment. I am surprised by the number of people who have dropped by and commented on my fungi blog as soon as I have made an effort to resurect it - how wonderful that my observations are being enjoyed!

Hey there! Pretty sure I found one of these this week- hasn't started decomposing yet, but I'm thinking it can't be far off. I used your AWESOME blog to identify it, but not 100% positive on it. Managed to take a photo of it if you'd like?

I have seen a lot of these particular Fungi growing in England and the ones I've seen here in Australia look identical , I know them as "shaggy ink cap" and that they are edible but should be avoided with alcohol as should be a lot of Fungi

Thank you to readers who have left comments on the where-abouts of this species of Coprinus fungus, and also to the edibility.

Most interesting to hear about others' findings.

Hi The Shaggy Inkcap or Lawyers Wig is definitely edible and if picked youngish and eaten immediately cooked in butter lightly are subtle but delicious. I found them in mulch bark in Wauchope about 10 years ago but only once unfortunately.

I used to picked them in France and I was very happy to find the'' coprin cheveulu'' in Canberra;it is a very delicate mushroom, and need to be cook less than one hour after picking it up;very fine and delicate test ;just cook it slowly in salt butter ;NEVER DRINK ALCOOL WHEN YOU EAT IT and few hours after because you can get some stomac trouble(not dangerous but unpleasant).

Thank you for your amazing blog. I It's an excellent short reference for me.
Regarding these Shaggy Caps, I was always sure it's a terribly poisoning mushroom.
Thanks and keep it live.