Following 50mm rain in northwestern NSW recently, I found 10 species of fungi in my residential backyard at Baradine, all on the same day. At least 4 were species I'd previously not seen. Geastrum fornicatum (Arching Earth Star), was a beaut find under the peppercorn tree (Schinus molle - an introduced tree originally from South America, and known as a pest in Australia). 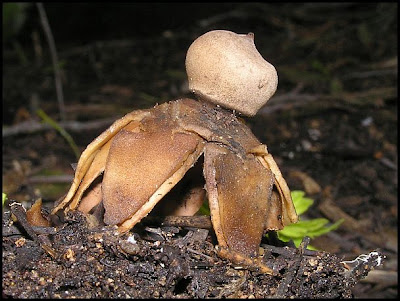 Unlike other Geastrum species that have lobes spreading out and curling upwards, or under the spore sac, the lobes of Arching Earth Star are joined at the points to an underground cup-shaped 'skin'.

This species was reported to be named Fungus anthropomorphus when first described in 1688 because of its uncanny resemblance to a human figure. 'Fornicatum' is derived from 'fornix' which refers to an arch.

Like other earthstars, the fruit body of Geastrum fornicatum is initially a small, off-white, partly buried sphere, or 'egg', about 17mm diameter. The outer, leathery wall (peridium) splits open into 4 or 5 triangular rays, that fold down into "legs" that support the spherical spore case that sits on a short stalk or pedicel.

The soft leathery spore case splits or punctures into a pore-like mouth at the apex to allow the dark brown spores to be distributed. The width of the arched fruit body is less than 5cm.

Habitat of Arching Earth Star is scattered or dense groups in leaf litter or in dry woodland and mallee scrub. It is also found in Europe and North America.


The 5 triangular rays of Geastrum fornicatum are joined to a basal cup at the points. The cup sits below ground-level, with the outer surface coated in sand, dirt and debris. The spore sac sits on a 3mm 'stalk'. 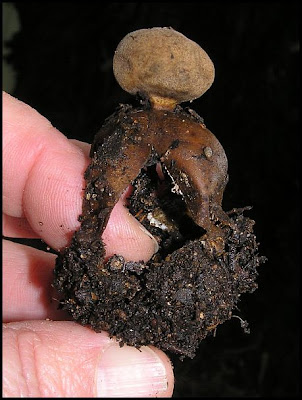 With some of the points separated, the basal cup can be seen to have shorter rays. The inner surface of the basal cup is off-white and relatively smooth. I found a native cockroach sheltering in the underground cup of this Arched Earth Star - what a resourceful little creature! 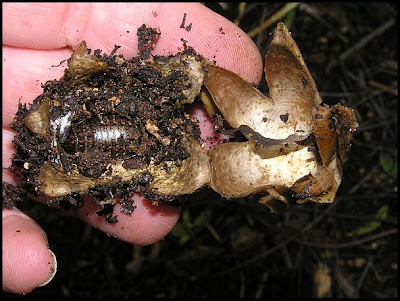 With the cockroach evicted, the inner structure of both the arched top section of the fungus, and the basal cup. 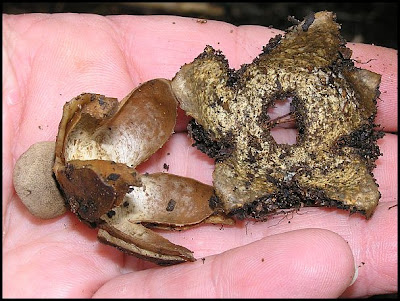 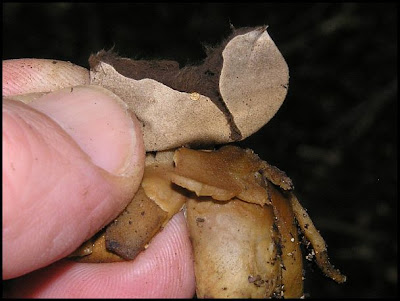 
[This will be updated with new sightings]

Interesting to see the dug up lower section. Never seen that before.
Thanks
Denis

it was certainly a fascinating find, and I was thrilled to have such a beauty in my backyard. Yes, seeing the base of the fruit body that is normally buried was very worthwhile. They were growing right beside other Geastrum species that I haven't positively identified as yet.

Recently found them in my front garden, popping out from under a section of mondo grass in full sun. Never had them here before. We are down past wollongong on the south coast.

Hello Denis, and the reader who kindly commented on the fungi find.

I'm a bit concerned, however, about correct identification as this fungus is typically a 'dry area' fungus. I'd love a picture if possible - they are very long lasting, so should be still in the Woolongong garden. My email address is on the right-hand side of the blog page.

Geastrum fornicatum is a common fungus in my garden in the states north west. I'd really love to have positive confirmation of the sighting at Woolongong.

I found 20 of the earth star fungi.Which I believe are Geastrum Triplex in my garden this week in Figtree NSW.
Ingrid