I've had the opportunity to search for dry-country fungi lately, and what fascinating fungi I've found. The Pilliga Forests and surrounds in semi-arid northwestern NSW have recently received decent rainfall, with all areas of nature benefiting.

Mycenastrum corium is a large tough-skinned puffball that splits into a star-shaped structure exposing the brown spore mass to the elements.

A mature specimen of Mycenastrum corium.
My hand gives an indication of the size of the fungus. 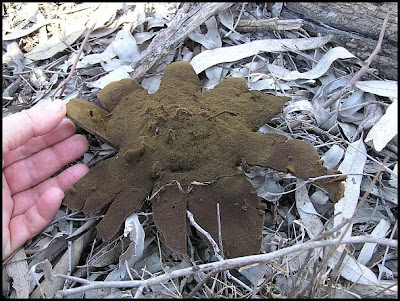 Mycenastrum corium is reported to be an arid to semi-arid species in Australia. In North America it is apparently most commonly found in association with horse or cow manure, or in lawns. It also occurs in New Zealand and Europe.

The specimens on this page were photographed in the semi-arid grazing country surrounding the Macquarie Marshes in northwestern NSW following soaking rain.

This hard-skinned puffball can reach 200mm in diameter. The outer white peridium (skin) sloughs away to reveal a tough inner purple-brown to brown peridium up to 2mm thick. The mature fruit body cracks and splits at the apex, with the stiff skin recurving in earthstar-like rays, or irregular segments.

Immature white gleba matures to an olive-brown, purple-brown or brown spore mass, which is dispersed by the elements once exposed. The mature spore mass often exhibits conspicuous thorny projections.

Mature fruit bodies do not appear to be attached to the substrate, and can roll around in the wind. The fruit body does not have a stem or a sterile base. Some sporocarps (fungal fruit bodies) may be partially buried in the substrate. It grows solitary or in scattered groups.

I wandered around several scattered groups of Mycenastrum corium, amazed by the different shapes of the mature fruit bodies. It was the first time I had encountered this fascinating puffball, and it was an exciting find.

There are international reports of Mycenastrum corium being edible at a stage when the gleba is still in its immature, soft, white state, but this has not been tested or confirmed in Australia. Wild-picked fungi should never be consumed without confident identification and expert mycological advice.

I would be most grateful if readers could let me know what locations and habitats they have found this puffball, especially in Australia. Bruce Fuhrer mentions in 'A Field Guide to Australian Fungi' Mycenastrum corium occasionally occuring in coastal dunes. 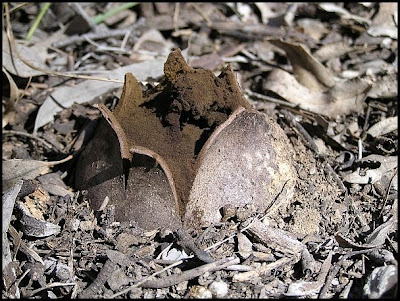 Showing the size of the newly cracked puffball 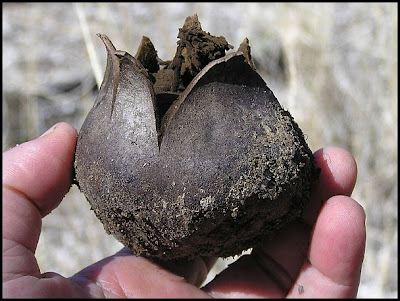 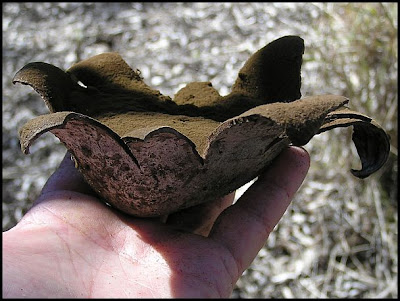 Showing the brown spore mass partly dispersed.
The fruit bodies were not attached to the ground. 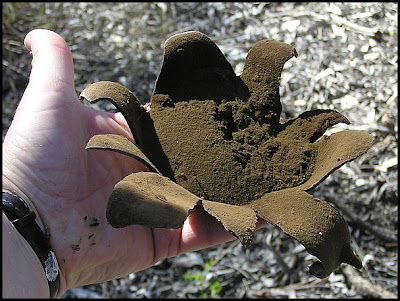 Not all Mycenastrum corium puffballs split into star-like shapes - this one irregularly-shaped segments of the stiff skin. This image shows the habitat. 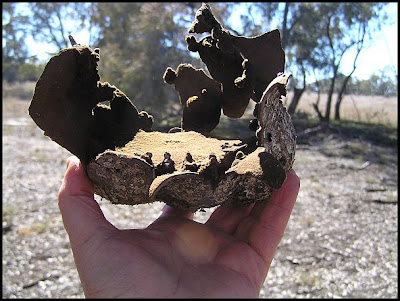 This puffball fruit body is more oval than round.
Notice the spiny projections in the spore mass. 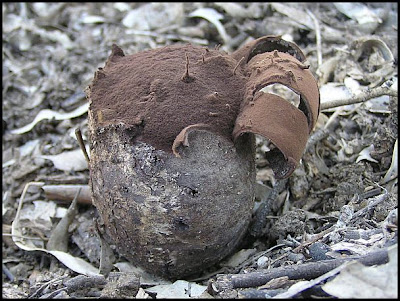 A better illustration of spiny projections in the
spore mass of mature Mycenastrum corium. 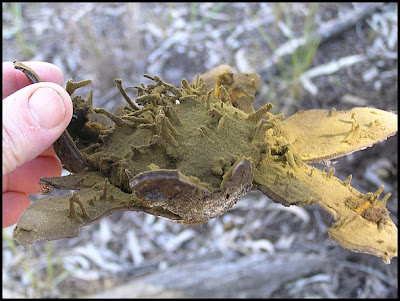 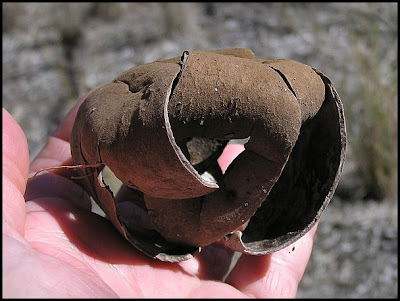 My sightings of Mycenastrum corium
[This will be updated with new sightings]
Gibson Way, northwest of Quambone, NSW - scattered groups in dry leaf litter in sparsely treed dry cattle-grazing paddock following soaking rain: Aug 2010.
Posted by Gaye at 9:40 am

Nice find. I've realised how much I'm missing out on since I moved to Sydney, and don't venture into the drier regions as often.

I think there should be plenty of places around Sydney to go fungi hunting, like outlying national parks. But it is surprising how productive public parks and gardens can be, as can residential lawns and gardens.

A fungi enthusiast has found and photographed about 80 fungi species on the grounds of Newcastle University this year (there's a photographic exhibition currently showing at the Uni), so it just goes to show that you don't need a piece of natural undisturbed bushland to find fabulous fungi in numbers.

I have been thrilled to find such different fungi in the semi-arid areas, which is a real change from fungi I've been finding at home in the Hunter Valley. Last time I visited my house in Baradine (northwestern NSW), I found 10 species at the one time in my 1/4 acre house block, and I don't even have any gardens yet. At least three of them were species I had not previously seen. I have another beaut fungus of semi-arid country to feature next on my blog.

Thank you for leaving a comment, and do enjoy your fungi observations - it's a wonderful hobby.

What a truly wondrous puffball!! You have a treasure trove at your arm's reach!

I certainly have got some marvelous fungi to discover up in that dry country. I'm sure you know my excitement as I find these strange fungi - it's real puffball country.

I found one of these puffballs yesterday in Melbourne and recognised it through your blog. Main feature that it's detached from a substrate and for that reason would be light enough to roll around in the wind. I will post photos shortly.

thank you for leaving a comment. I'm surprised to learn that you have found this species in Melbourne - how interesting !!

I've checked out your flickr account and I'll be pleased to see your pictures when you get them up.

Thanks for your reply.

Here is the link to the photo:

HAVE A FARM HERE IN NORTH CAROLINA EASTERN USA SAW BROWN SPOTS ACROSS LAWN noT in pastures but closer to the pond; got up close and well its these mushrooms I found on your site
if I kick it out of the lawn it puffs and explodes like a small smoke bomb! funny thing
it s warmer than usual this winter and today i noticed alot of them( a dozen _ _) what is their purpose and how to get rid of them? ugly do look like a patch of horse manure droppings!

thank you for the sighting. I don't know what the climate is like in North Carolina, but unless it is semi-arid or arid country, your puffball fungus might be another species; possibly Scleroderma cepa:

Or, funnily enough, a Horse Dropping Fungus (a species of Pisolithus).

The purpose of fungi is to decompose organic matter and return nutrients to the soil. Without the vital job that macro fungi do, our planet would have extremely infertile soil.

The main part of the fungus consists of masses of microscopic threads below the ground, or in the wood that the mushroom appears on, so even if you scoop up the 'fruiting bodies' of the fungi and dispose of them, the growing and spreading part of the fungus is still there.

So if you dislike the look of the fungi on the lawn, binning them will solve your problem for the time being, until conditions are right again for the fungus to send up new fruiting bodies.

Good luck with it. Fungi are fascinating.

Hi there, notices something similar in my front garden on the nature strip in Melbourne (southeast suburbs) in the past few years, although I haven't happened on them this year. Cheers Alex.

in Melbourne the fungus you describe is more likely to be another hard-skinned puffball called Scleroderma cepa. Here's a link to my entry of this fungus:

We found something very similar, but we found them after they had split open, and a small inner puffball was there, with a thin skin easily ruptured and from which erupted a fine powder of brown spores. It looks as if animals are eating them, though I have not found tracks... there are deer, squirrels, raccoon, coyote, turkeys etc. We are on the edge of a large public park in an oak woodland east of Sacramento in the foothills. Earlier this spring I found hard-skinned white puffballs in a nearby location that were delectable.

We have a couple of these growing here in the South East of SA near Millicent. One is opened to the star stage, the other hasnt started to open yet. I will keep a photo record if you are interested.
Peter