Fungi that don't take the usual mushroom-like form, are absolutely fascinating, and Cymatoderma elegans is a beauty. It's common name is Leathery Goblet, and I have also seen it referred to as Wine Glass Fungus - both of which are self explanatory.

A beautiful Cymatoderma elegans in the rainforest of Barrington Tops National Park - with concentric rings on the upper surface, in shades of brown and off-white, and low vertical ridges. 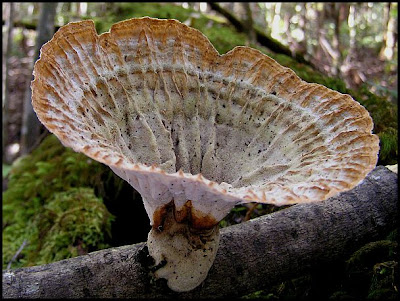 Cymatoderma elegans var. lamellatum (pronunciation: Sigh-mat-o-der-ma elegans) is from Family Podoscyphaceae. In Australia it is found on rotting wood in rainforests on the east coast.

The cap has the feel of soft, thin, flexible leather. Colour of the upper surface of this funnel-shaped fungus can vary from almost white, to many shades of brown, sometimes with hints of violet. Reliable books define the size of the cap as "diameter to 100mm, depth to 150mm", but I found one specimen recently with diameter to 350mm and depth to 250mm.

The central or off-centre stem has a length to 75mm and a diameter to 15mm. The stem is tough and woody, brown on brown caps, and whitish on pale caps. One cap can have more than one stem, with the cap of each stem merging as they grow to form a single fruit body.

The smooth white lower surface. This fruit body of Cymatoderma elegans emerges from the ground, therefore must be attached to rotting wood below the surface of the ground. 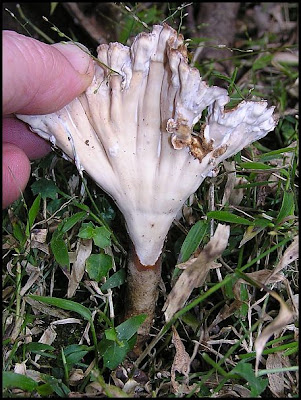 Upper surface of this specimen of Cymatoderma elegans has several tones of pale brown. Note the raised pale concentric zone nearing the top of the cap is 'hairy' or velvety. 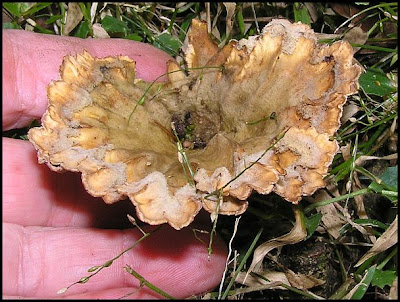 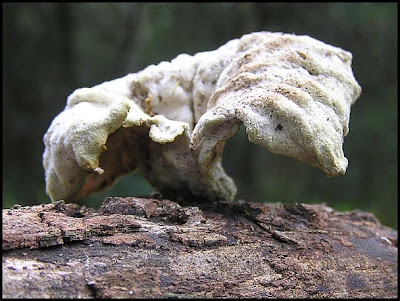 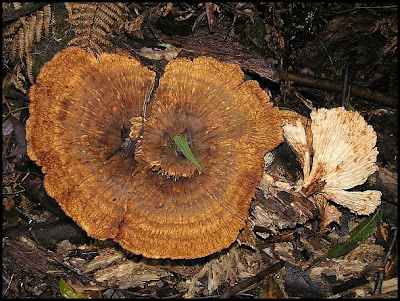 The hand gives a size comparison to this unusually large specimen of Cymatoderma elegans - 350mm diameter and 250mm depth. This fruit body has three stipes (stems) so is presumably three merged caps. 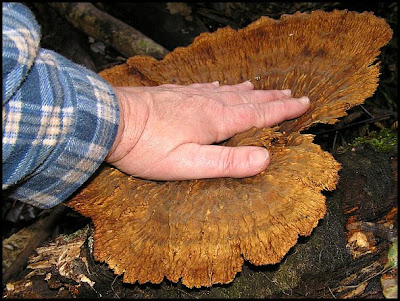 The pale under surface has vertical folds and ridges. 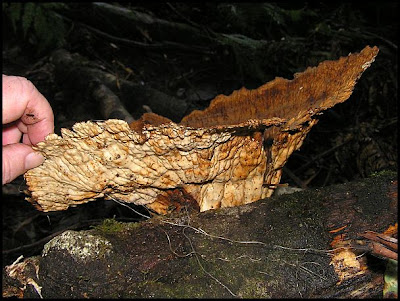 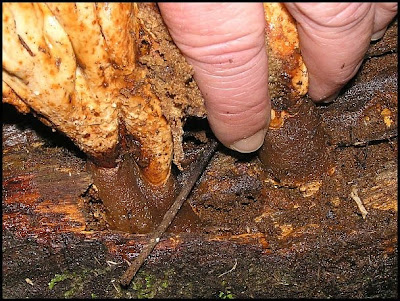 Three species of Cymatoderma have been recorded in Australia, Cymatoderma dentriticum has not had any authentic Australian sightings since 1892, and Cymatoderma plicatum (separated from C. elegans only by slightly larger spores), was collected in 1918, but not since. [Ref: Vol 18 March 1999 Australasian Mycologist Journal]

Medicinal properties: It has been recorded that compounds extracted from mycelial culture of Cymatoderma elegans tested on mice inhibits the growth of some cancers. The Polysaccharides extracted exhibit anticarcinogenic properties in controlled experiments. [Ref: Medicinal Mushrooms]

My sightings of Cymatoderma elegans
[This will be updated with new sightings]
Barrington Tops National Park, NSW - Rainforest, Mar 04, Jul 10.