A wide variety of 'white toadstools' pop up in lawns, paddocks and roadside verges, and they can be difficult to confidently identify. I am reasonably sure I have this one correctly identified, but if any reader disagrees, please let me know.
Chlorophyllum hortense is from the family Agaricaceae. It is a big, fleshy fungus and occurs commonly in man-made habitats - in compost-enriched garden soil and lawns, and grazing pastures. It has a wide tropical and sub-tropical distribution, and in Australia is found in the eastern states, except for cold regions. It is also found in North and South America, Africa, Japan, India and parts of Asia. 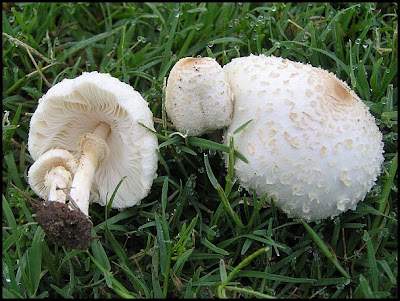 Cap is 5 to 10cms wide, white to cream, tightly convex at first, widening to broadly convex. It has a distinct yellowish to brownish umbo (central bump on top of cap), and is strongly striated (grooved) on margins. Yellowish to brownish dry scales are present on the cap.

The stem is 3 to 7cm tall, perhaps even to 10cms, and has a movable annulus (fleshy ring). It is hollow, with a swollen base. Flesh is white and thin, and rapidly reddens when cut or bruised - this is an identifying feature of Chlorophyllum hortense. It has a mushroomy smell, white gills, and white spores.

The fungi pictured here were fruiting in my lawn a few summers ago. They formed a 'fairy ring' (diameter 3mts) of 52 fungi. Six weeks later, 64 Chlorophyllum hortense appeared in the same area in my lawn, all having moved a further 30cm out, forming a larger fairy ring. I have since moved from my rural home into town, so have not had the opportunity to make further detailed observations.

New fruiting bodies of Chlorophyllum hortense,
with one cut to display red bruising when flesh is cut.
Also, notice the hollow stem. 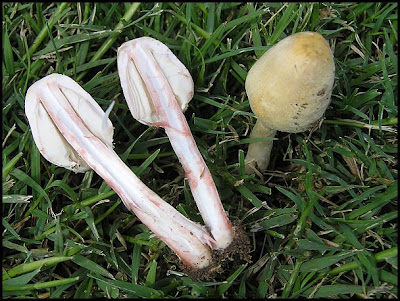 Series of 3 images of a group of Chlorophyllum hortense: 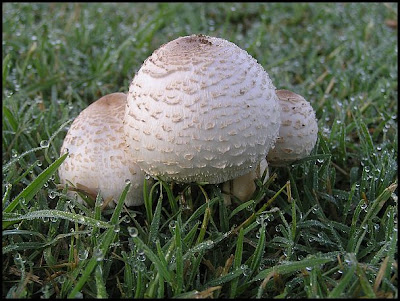 24 hours later - the caps broaden. Notice the striations around the rim of the cap. Notice also, the droplet of water on the left-hand fungus has colour leeched from the cap colour. 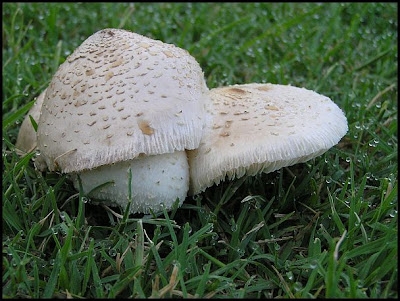 30 hrs later, the fungi fruit bodies are dry and collapsing 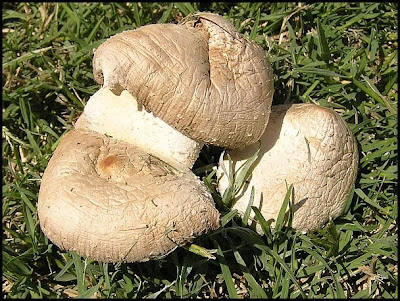 A splitting cap of Chlorophyllum hortense -
Notice the dry movable ring on stem. 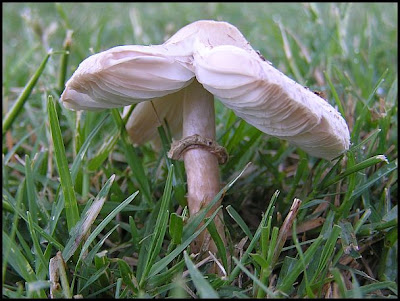 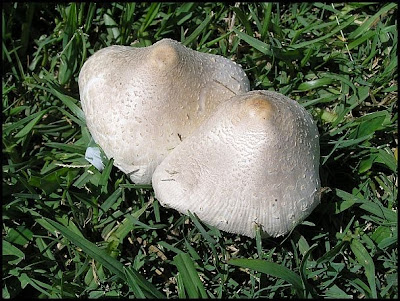 Toxicity: There are differing opinions on the toxicity of Chlorophyllum hortense, so consuming it should definitely be avoided. In Brazil, at least two young children have died after consuming Chlorophyllum hortense, and several people have become ill. But studies have shown that levels of toxicity are affected by environmental conditions, thus the opposing opinions.

My sightings of Chlorophyllum hortense:
[This will be updated with new sightings]
Singleton, NSW - rural, lawn, Jan 05, Feb 05
Posted by Gaye at 11:34 am

thank you, and I'm glad you enjoyed. You have obviously been finding some beaut fungi too.

The photos of the mushrooms in the blog are depicting quiet different looking samples. So I am not sure if they all refer to the same species.
As for the Toxicity there is some confusion about it. Some of the sample photos are depicting indeed mushrooms that may be toxic (last photo) while the first photo at the top depicts an eatable and a very delicious mushroom. I have eaten this type of mushrooms for the past 10 years and never had any ill effect. Of course you need to pay big attention in telling them apart and only the ones in the 1st, 3rd and 4th photo can be recognised enough to state that they are comestible while the others are too different looking to be sure. As for the name the edible ones look more like Macrolepiota rhacodes or Chlorophyllum rhacodes. The Toxic one is the one that is green underneath Chlorophyllum molybdites.

thank you very much for your comment, and your opinions on identification.

Back when I collected and photographed these images, I didn't keep detailed written records, but I know all specimens were from the same 'fairy ring' on two occasions, so I assumed they were all of the same species.

I hope at some stage I will get another opportunity to observe them.

I've always had that top species pinned as macrolepiota dolichaula (which I have read is an edible species). These all look quite different to me, too. Not sure what to think now.