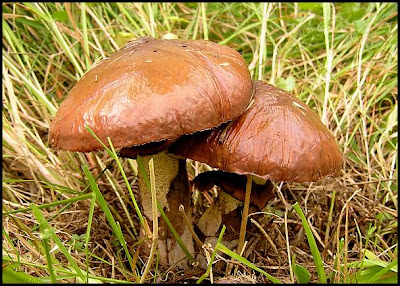 With the help of other amateur fungi enthusiasts, I have established that the most recognisable physical difference (for amateurs) between Suillus luteus and Suillus granulatus is the presence or absence of a ring or annulus.
In some fungus species a partial veil initially covers the pores or gills. As the fruit body expands and matures, the partial veil usually breaks to form a 'ring' on the stem. Suillus luteus usually has the remnants of the veil hanging on the upper quarter of the stem, while Suillus granulatus does not. This feature makes it a little easier to distinguish between these two boletes that are otherwise very similar in appearance, both of which are from family Suillaceae.
Freshly emerged Suillus luteus have a gelatinous coating 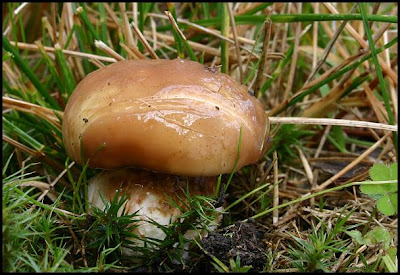 Suillus luteus (commonly called Slippery Jack) is mychorrhizal with various exotic conifers, meaning that it forms a symbiotic relationship with pines. Therefore, people who are fond of eating wild mushrooms can often pick up a feed (yes, they are reported to be edible) amongst, or on the outskirts, of pine plantations. However, I can not vouch for their palatability. Both Suillus luteus and Suillus granulatus were introduced to Australia from Europe with exotic trees.

The partial veil tears away from the cap 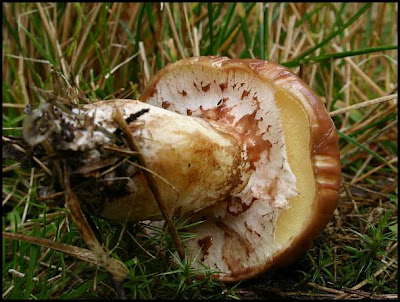 Caps are convex (dome-shaped) at first, and very glutinous (jelly-like). They flatten as they mature, reaching a diameter of up to 150mm, and are viscid (sticky or slimy).

Pores are yellow, aging to a dirty yellow. A brown annulus forms on the upper portion of the stem, sometimes falling off leaving a purplish brown band or stain. The white or cream stem (or stipe) is covered in fine brown speckles. Spore print is yellow-brown.

Speckled stem and remnants of a ring 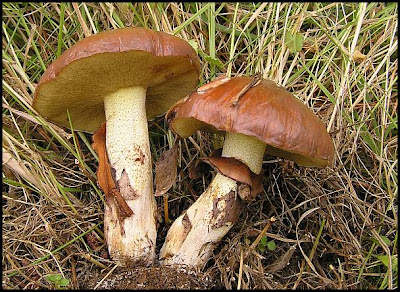 Yellow pores age to a dirty yellow, and flesh is pale yellow 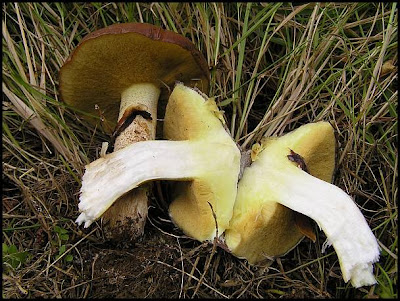 My sightings of Suillus luteus

Hanging Rock, NSW - in and around pine plantations - Mar, Apr, May.

I encountered collectors in pine plantations of Hanging Rock. They sliced the fungi and spread them out to dry. 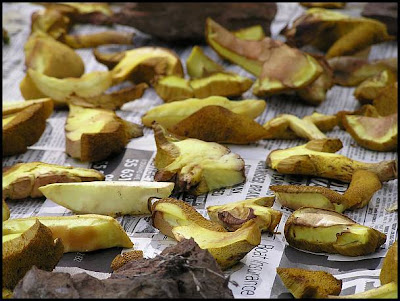 Very interesting Gaye. Does this fungus occur in quantity, or was the person collecting them only doing so for themselves?

four people were collecting, and their dissected fungi covered two park picnic tables at the camp ground at Sheba Dams at Hanging Rock. I had wanted to ask a couple of questions, but the owners of the collection were not to be found at the time.

We had seen them collecting on the forest road early in the day. The boletes were numerous on this particular occasion. However, I have visited the same area in the same month in other years, and they were only scattered.

I am presuming that the quantity and time of fruiting depends on autumn rains.

Both these boletes are edible if prepared the correct way. The best ones to pick are the ones that are firm and dont have a high moisture content (will dry better). you need to clean them by scraping the stalk, and peeling back the slimey top. Wear gloves, they will stain your hands. Once its clean you chop it up into small pieces (as per your image). then they need to be dried very well. you need to make them completely dry in about 30hours otherwise they deteriorate. you can string them and hang them near a heater or put them on a drip tray in the oven on low heat with the door open. Once dry you can store them away and use them as you would conventional dried mushrooms from a store.

As with any mushroom you need to be 100% sure you have identified it correctly.

I apologise for the lengthy delay in posting up your comment and my response.

What a wealth of culinary information you have provided. Thank you most sincerely for sharing your knowledge and experience with me and other fungi enthusiasts/hunters who might read my blog. This is valuable information.