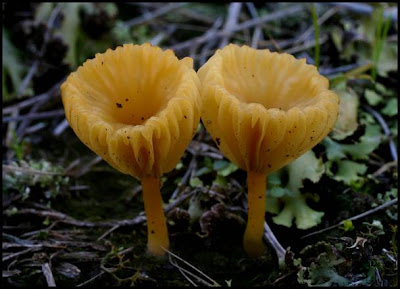 This dainty little yellow fungus is Omphalina chromacea, common name Yellow Navel, from family Tricholomataceae. Pronunciation is Omfa-lee-na crow-may-see-ah.
There is an oddity associated with this species: it grows in conjunction with a mat of green algae on the ground. It is commonly found amongst bryophytes (mosses, liverworts and hornworts), or on bare ground, but the alga is always present. It is thought by some mycologists that it is likely Omphalina chromacea may be the fungal component of a lichen (a symbiosis between an alga and a fungus). The alga is most likely Coccomyxa.
Young Omphalina chromacea with down-turned scalloped rim 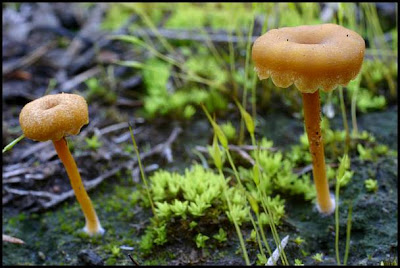 Caps can be up to 25mm diameter, and start out convex (domed) with wavy or grooved margin, with a central depression. As the fungus matures, the cap flattens and then becomes funnel-shaped.

Gills are decurrent (running partway down the stem), and are yellow. The central stem can be up to 20mm high by 2mm wide. Spore print is white.
Omphalina chromacea is found in native forests in south-eastern and south-western Australia, often on the sides of tracks and banks where there has been disturbance.
Following the June 2007 Hunter Valley floods, I found many groups of Omphalina chromacea in Werakata National Park in the lower Hunter where the ground had been extremely wet. A mat of green algae was surrounding all I observed.
Omphalina chromacea amongst moss 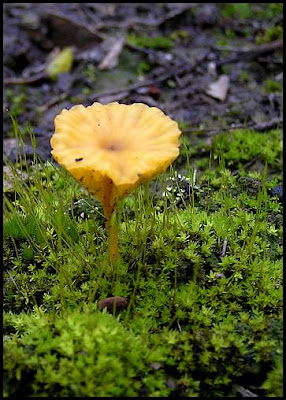 My sightings of Omphalina chromacea
[This will be updated with new sightings]
Werakata National Park, NSW - In and on the edges of Leptospermum and Eucalyptus forest: Jul, Aug, Oct, Jun 2011, Jul 2011.
Cassilis, NSW - Under scattered Eucalypts: Jul.
The green algal mat is very obvious 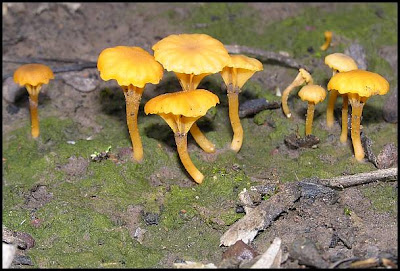 We get a number of Omphalina species on the other side of the world here in the UK; I'm not sure we get this one however.

Pleased to meet another amateur fungus blogger! I've given you a link from my site.

thank you for leaving a comment here. It's great to know that people stumble upon my blog and find something of interest in it.

I have had a brief look at your blogsite and am looking forward to checking it out in detail. You and I apparently belong to the same strange tribe of amateur nature enthusiasts who are attempting to teach ourselves about the intricacies of the flora, fauna, fungi and more that we find ourselves living amongst.

I have a nature blog (click above to go there) which has the same theme as yours ie: identifying the nature in our own backyard and learning how they work and why they are here - along with encouraging others to notice the nature around them.

Fascinating. The more I learn, the more questions I have.

I just stumbled on this, whilst trying to identify a specimen I found today. Fantastic images, turns out it was this little one after all. Thanks for the information. :)

Likewise, came across this site while trying to identify a specimen. Mine's a bit more orange, but looks like an omphalina.

I'm a complete amateur, but have become entranced by local fungi in Victoria. I've put your site in my favourites list.

I love it when I hear of others becoming "entranced" by the beauty and mystery of fungi. Have fun with it, and thank you for leaving a comment.