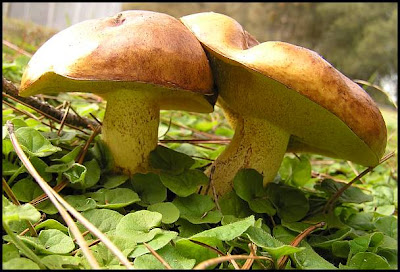 With the help of other amateur fungi enthusiasts, I have established that the most recognisable physical difference (for amateurs) between Suillus granulatus and Suillus luteus is the absence or presence of a ring or annulus.
In some fungus species a partial veil initially covers the pores or gills. As the fruit body expands and matures, the partial veil usually breaks to form a 'ring' on the stem. Suillus granulatus does not have remnants of a ring, whereas Suillus luteus usually does. This feature makes it a little easier to distinguish between these two boletes that are otherwise very similar in appearance, both of which are from family Suillaceae.
Yellow pores of Suillus granulatus 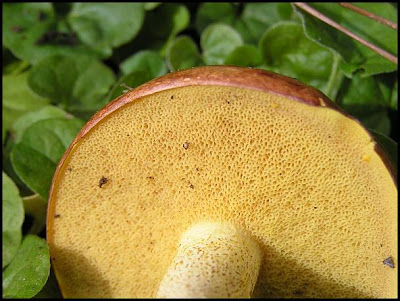 Suillus granulatus is mychorrhizal with various exotic conifers, meaning that it forms a symbiotic relationship with pines. Both Suillus granulatus and Suillus luteus were introduced to Australia from Europe with exotic trees.
A bolete is a fungus with a cap and stalk that has a series of small pores on the underside of the cap, instead of gills. The pores may be either round or angular. The spores are formed inside the pores and they drop out of the pores when mature.
Pores are the 'mouths' or openings of tubes. A cross-section of a bolete shows the narrow tubes compacted. 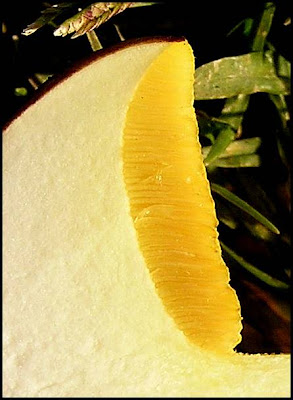 Caps of Suillus granulatus are convex (dome-shaped) at first, becoming broardly convex, then flattening, sometimes disfiguring. The cap is viscid (sticky or slimy), although, in my limited experience, not always. There should be no remnants of partial veil on the rim of the cap or on the stem.

Stem is white, speckled with brown, and is not always centrally placed. Pores are yellow, aging to a dull yellow, and flesh is white to pale yellow. Spore print is yellow-brown. 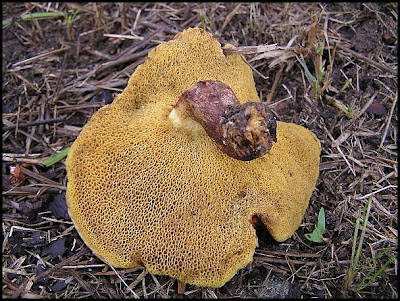 Caps can turn up with age 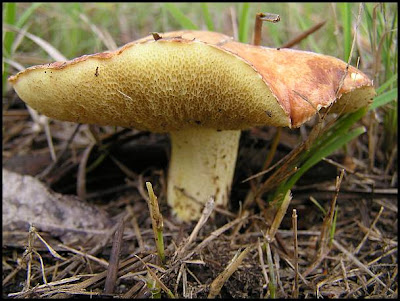 My sightings of Suillus granulatus

Hanging Rock, NSW - on the edge of pine plantation - Apr.

Suillus granulatus on the edge of pine plantation at Hanging Rock. Note the collapsed fungus (front right) - these boletes, like many, collapse and decay quickly and are often infested with magots. 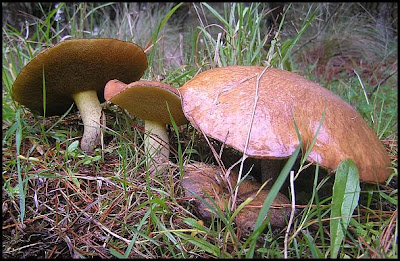 Hi Gaye, as this species is so similar to Suillus luteus, an edible species; is this one edible too, or do you need to be very careful to pick the right one?

I am not positive, but I think it is also edible.

However, I would have to be pretty hungry, with no prospect of a meal in the foreseeable future before I would be tempted to try them. I'm not at all adventurous when it comes to eating wild fungi. I have seen these boletes so infested with maggots and collapse into gooey slimy blobs that the thought of one sliding down my throat is just plain disgusting.

I'll buy my mushrooms from the supermarket :)

I am never sure about eating them, either. But I do love the look of them when they are fresh. A friend of mine grew some of the huge native Boletes, this year. A small child could squat on top of one of them. Amazing.

Do they have tinned mushroom soup in Australia? If so, here in Europe at least, it's a lesser known fact that the mushroooms often used to make it are boletes (though not Suillus as far as I'm aware).

I have yet to see any huge boletes - 15cm would be about the largest width I have seen. I have however, seen some attractive and interesting ones. They are all a challenge for me to identify, even the blue-staining species.

interesting indeed. I do recall seeing tins of 'cream of mushroom' soup. My local supermarked doesn't stock a great variety of fresh fungi, but they do have a couple of the 'newer' species on the market. I have also not been brave with these (so expensive, and not knowing how to actually include them in a meal), and stick to the common flat and cup mushrooms.

Weeping Bolete. Suillus Granulatus. Found under pines in Inverell today 1/3. They are edible but boring and I think must be used in other mixtures for bulk.