Aleurina ferruginea is from family Pyronemataceae. It appears to be relatively common in mixed forests following good rain.
Pyronemataceae is a large family of cup, disc or ear shaped fungi. Aleurina ferruginea grow singly or gregariously (scattered, or loose groups). I have found them in two different habitats on different substrate (growing surface). My first sighting of this species was in alpine woodland growing on rotting wood, while my second sighting was in Leptospermum (tea-tree) scrub on clay soil.
Appearing brighter yellow than in situ due to use of flash 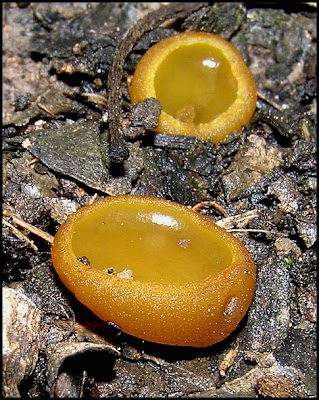 The shallow discs I have seen were up to 15mm wide and up to about 6mm deep. The yellowish outer surface was finely velvety with tiny brownish 'warts'. The inner surface was greenish-yellow and smooth.
On rotting wood in New England National Park 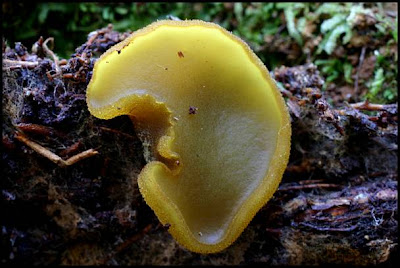 My sightings of Aleurina ferruginea
[This will be updated with new sightings]
New England National Park, NSW - on rotting fallen wood in alpine eucalypt and grass woodland - May 2007.
Werakata National Park, Cessnock, NSW - on soil in Leptospermum scrub - Jul 2007, July 2010. 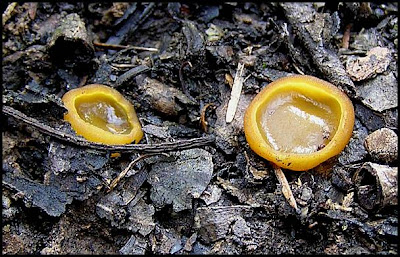 Another nice thread in your blog, Gaye. And good photography, too. Fungi like these test your photographic skills, because you need the depth of field to get the inside of the cups in focus.

Once I started looking for fungi, I found the cup ones to be surprisingly common. Mine tend to be dark brown in color and unless specifically searched for, are easily overlooked. Do you know if cup fungi are generally plentiful?

actually, I was not satisfied with my photos of this fungus, but that is always the way when we expect more from ourselves - a requirement for experimentation and improvement.

They were difficult to photograph, and I did try to find my most recent speciments again, with no such luck. But I have found some juveniles of perhaps the same species that I hope to revisit.

No, I have not found cup fungi to be plentiful in the Hunter. In fact, I have only found one species in the Barrington Rainforests where I generally go fungi hunting.

But recently I have found what I think are three species on bare damp earth in local bushland that has been flooded.

These appear to be very slow to mature, and start out as tiny 'dots' - brown, green/yellow and orange, progressing into very small discs. Identification is very confusing, but I am interested to make further observations.