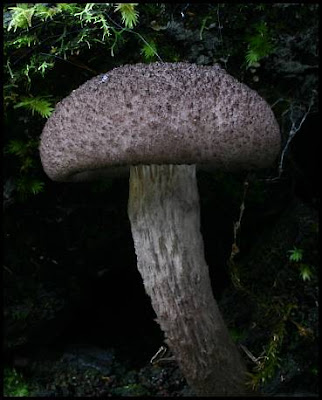 This interesting fungus from family Boletaceae is a Strobilomyces species, most probably Strobilomyces floccopus. It is sometimes referred to as The Old Man of the Forest. Boletes produce their spores in pores (instead of gills) which are tubes forming a honeycomb surface of holes on the underside of the fungus.
White pores and inturned margin of the 4cm cap 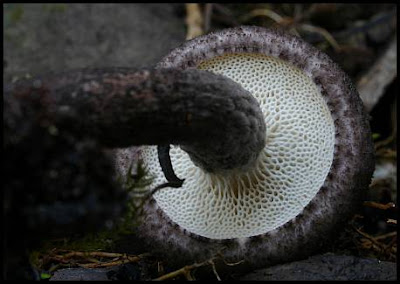 I have only found two specimens, both in rainforest, one growing on a dead log, the other in soil. The cap is convex with an inturned margin which can hold remnants of a partial veil, and is covered in dense woolly purple/black scales over white. The cap can be up to 110mm, but I have only seen it up to 40mm.

Pores are white, darkening with age, and staining orange/brown when bruised, eventually turning black. The stem is purplish, shaggy and reticulate (raised ridges). The solid white flesh of the stalk and cap also turn orange, then black, when cut.

Pores attach to the stem in a sinuate fashion 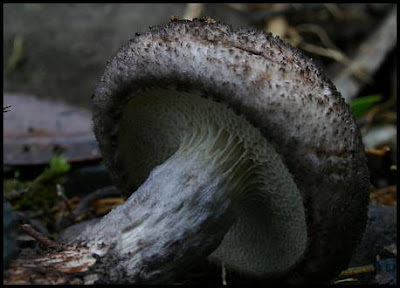 Short shaggy scales of the cap 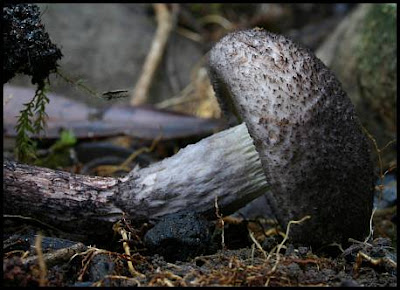 I have not taken a spore print, but it is recorded that the spores are blackish brown. Here is a site with additional information on this species along with the only species it is likely to be confused with, Strobilomyces confusus.

The white pores have turned black, the white flesh orange before blackening. 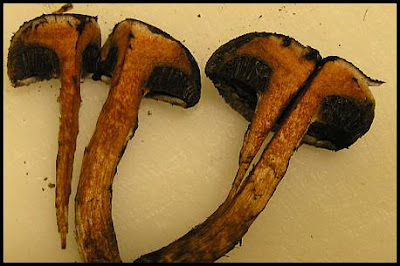 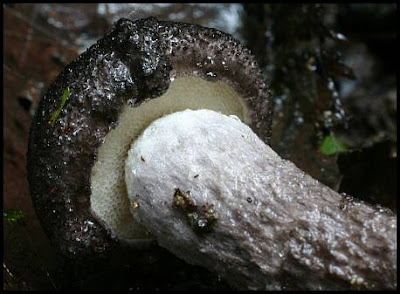 I was quite amazed to identify this species on my daily walk this afternoon - growing in soil in a park in inner city Brisbane (Bowman Park, Bardon 4065). It was an older specimen and the pores had turned black though the ones near the edges of the cap were still white. The stem and top were quite "cottony". Stem turned pinkish, then grey and finally black upon exposure to air after cutting. Spore print is browny black.
Smell is woody/mushroomy - no phenolic scent. The small piece that I ate tasted just like it smelt but the texture was quite nice. Probably tastes better when smaller!

I can only guess that this mushroom appeared in the park due to the large amount of rain we have been having! I hope to find some more of these in the same area in the next few days.

sorry for the delay in responding. I think it's great that you found this species in such a public place - I've only seen a few, ever. Yes, the rain is sending fruit bodies up - beaut to be able to take advantage of such unexpected beauty.

I love your cooking blog. It has inspired me to share a few of my recipes on my journal blog. You do a super job of photographing your meals.

Happy new year to you :)