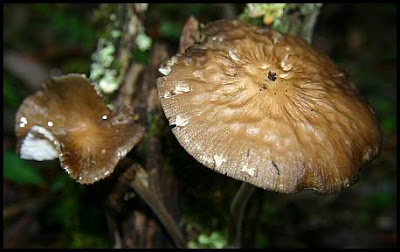 Xerula australis, until recently was known as Oudemansiella radicata var. australis, and is still referred to as being part of the Oudemansiella 'group'. Its common name is Rooting Shank, which refers to the underground tapering root-like extension of the stem. Pronunciation is Zer-rule-ah austrah-liss. The matchbox in the previous image gives an indication of the height of this fungus. I have seen mature specimens to about 280mm high.
The new cap is mid to dark brown, viscid (slimy) and broadly convex (domed). The cap flattens and dries with age to a grey-brown, often with wrinkles and/or dimples, and can reach a diameter of about 80mm. Dimples are evident in the first image.
An aging cap with a darker, very slight umbo (swelling at the centre of the cap) 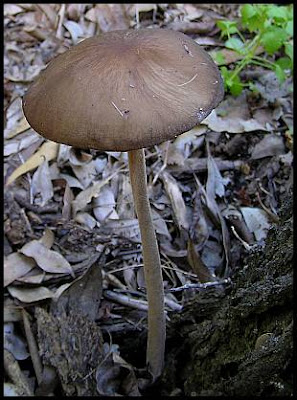 Gills are white, various lengths, deep and widely spaced. The white gills contrast vividly with the brown cap making this a striking fungus. Spore print is white.
Another striking feature of this fungus is the height of the stalk, often standing tall above surrounding grasses. The stalk is dry and covered in short hairs giving a 'velvety' appearance. I have noticed the stalk of some mature specimens appears to have a vertical 'seam'

A mature Xerula australis (right) together with an aged and a collapsed specimen, all fruiting from dead wood. 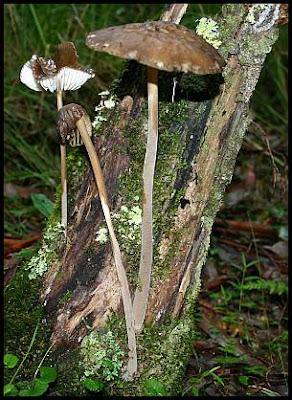 An aging cap turning up into a distorted shape, and displaying wide-set white gills. 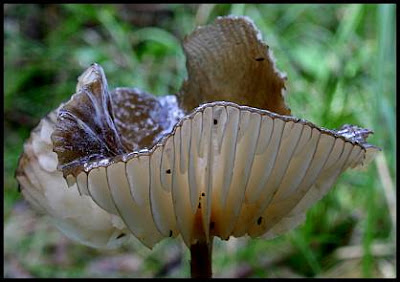 Xerula australis is a common fungus that grows in native forests, grasslands and parks. It grows solitary or in small groups, and is usually attached to underground wood. According to Fungimap Australia of Royal Botanic Gardens Melbourne, its distribution includes eastern NSW, Victoria, Tasmania, south-eastern SA, and south-western and the central coast of southern WA.

Shiny cap of an immature specimen 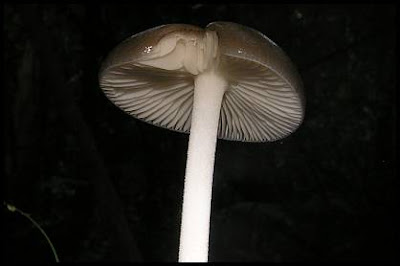 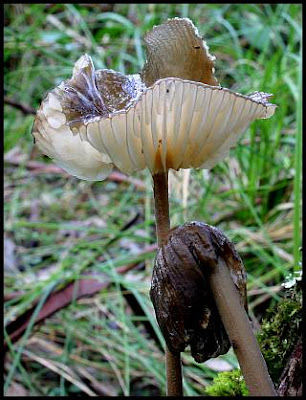 Hi Gaye, another interesting fungus. It looks very distinctive and thanks to your description easily recognisable. I can't recall seeing them in the Esperance area unless in a much shortened form.

there is another species in this group called Xerula radicata var. mundroola, common name Fire Shank.

I haven't seen this species, but it is apparently similar but found only after fire.

It has a darker cap, and a thicker and darker stem. I am unaware if the stem is shorter, however.