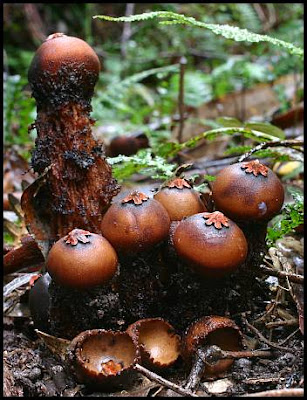 Calostoma fuscum is a stalked puffball from family Sclerodermataceae. It's common name is Common Prettymouth. This unusual and ornamental puffball is found on the ground amongst leaf litter in moist forests, or sometimes emerging from steep earthen banks.
I have encountered these fungi occupying the exact spot by the Williams River in Barrington Tops World Heritage rainforest over several years. They are long lasting, but once any orange colouration darkens to blackish-brown, they are well camouflaged on the forest floor.
The cap falls from the mature puffball 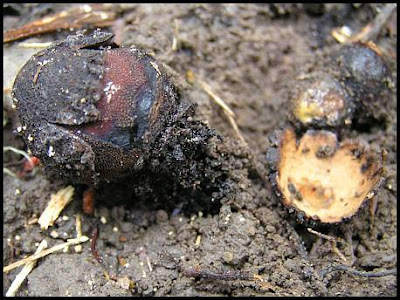 The stalk, which I have observed growing to a height of about 80mm, is composed of tough, gelatinous, interwoven strands which can be orange, aging to brown or black. The 15 to 20mm wide stalk is topped with a round head covered with a warty semi-circular cap, or lid, which falls off as the fungus matures.
An orange star-shaped mouth (or stoma) covers a hole in the apex of the head, allowing the white spores to be released when gentle pressure is applied by passing animals or moving vegetation. In the image below, you can see that there are indentations in the head of the fungus below the stoma providing exits for the spores to be dispersed in several directions.
The bright orange mouth, or stoma, of C. fuscum 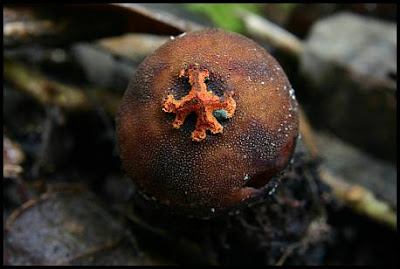 In the picture below, you can see that the star-shaped mouth sits raised to allow escape routes for the spores. The discarded cap has a smooth interior with an imprint of the mouth. The cap falls off in one piece.

I am unsure of the distribution of Calostoma fuscum, but the Fungi Map project of the Royal Botanic Gardens Melbourne shows it to have been recorded in eastern NSW, Victoria, Tasmania, and the Adelaide district of SA. 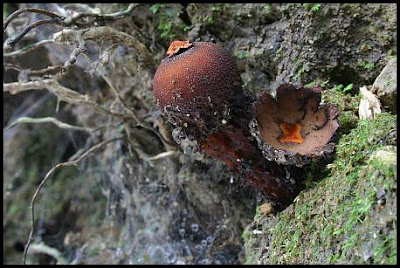 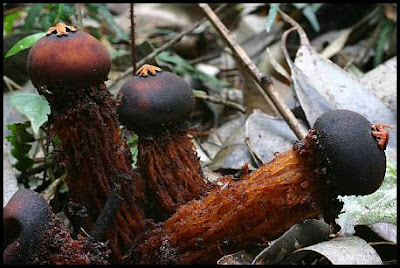 What a cute fungus Gaye. Where abouts in SW WA is it found, as it is not shown on the distribution map? I presume it has been discovered recently (post 2000).

Hello Jack, I was sure there was a single little red dot on the map in SW WA, but, no, there is not. Until I find out for sure, I will edit out the reference to SW WA being included in the distribution range.

Thank you very much for drawing my attention to this. I am hoping that this is what readers will do if they notice discrepancies.

And yes, it is cute fungus.

Very nice,informative blog and your photos are excellent. I see from the fungi you are yet to post about that you are going to be busy for quite a while...

hi Peter, thank you. I do hope I will be busy observing fungi, especially with some rain in my part of the Hunter Valley finally.

There's something very relaxing and satisfying about wandering a forest trail checking out all the weird and wonderful fungi poking their heads up after rain.