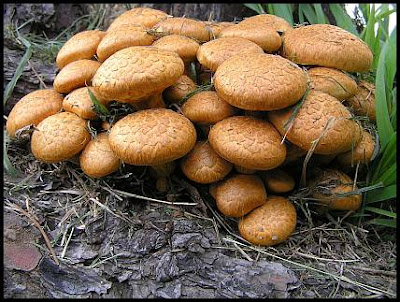 Gymnopilus junonius, common name Spectacular Rustgill, of family Cortinariaceae, grows on dead wood of a variety of trees (formerly known as Gymnopilus pampeanus). The two examples that I am featuring here were growing at the base of an introduced conifer. Pronunciation: Jim-no-pie-luss jew-known-ee-us.


Caps are golden-brown to orange, convex but flattening with age, dry, and usually covered with fine scales (fibrillose-scaly texture evident in top image). Caps can reach 150mm diameter but caps in these photographs do not exceed 70mm. 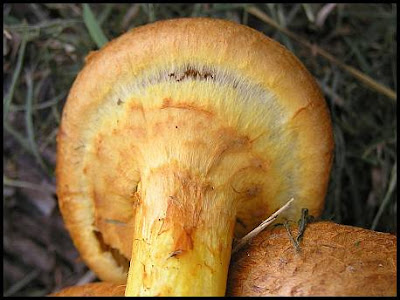 An initial partial veil tears, folds back forming an immovable ring which all but disappears with age. The crowded gills are pale creamy-yellow becoming rusty-brown with age. Spore print is rusty-brown.
Stems are central and can reach a height of 110mm. The base of stems can be distorted due to crowding of large clumps of fungi.
Distribution: According to Fungimap of Royal Botanic Gardens Melbourne, Gymnopilus junonius has been recorded in southeastern NSW, Victoria, and southeastern South Australia. 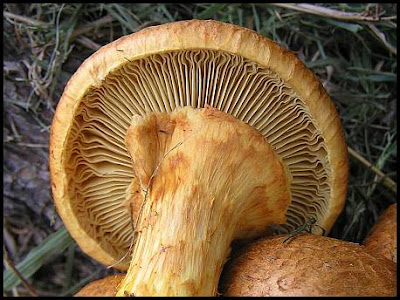 Mature fungus with remains of ring close to cap 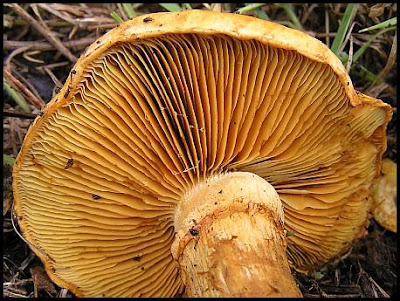 Greta (Hunter Valley), NSW - At the base of introduced conifers on the New England Highway roadside - May, Oct.

Mature specimens that are more orange than brown 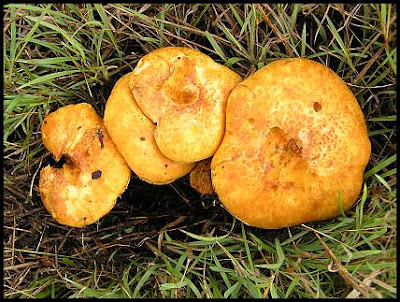 Found some clusters of fungi today which I think are the same, but smooth without the scales and more orange in colour. The largest of the ones I saw were 70-90mm. They were growing in several clusters hard up against the base of a Eucalyptus maculata and then there was a secondary ring of clusters around 2-3m from the tree. There were literally hundreds of them ranging from groups of 2 or three to twenty or more. Got some images of them and plan to keep observing them every couple of days for as long as they are there. Will also try to remember to visit the site earlier in the season next year and try to get an understanding of the fruiting season / time.

your new camera will help you discover the details of the nature subjects you observe - no doubt you would have already noticed this :)

Were the host eucalypts dead or living? Be sure to inspect the underside of mature and young specimens. Your mirror will do this effectively.

My observations of G. junonius, together with images posted on Scribbly Gum, indicate a wide range of colouration from yellow/orange, orange to tan.

As always, I enjoy hearing about your experiences with nature.

Hey I found what I think is a clsuter of these at the bottom of a tree (I think a eucalyptus tree) and I want to know how long these take to grow and if there is anything I can do to speed its growth up, also I looked at Pete's (the other guy who commented on here) and his pictures of the ones he found look like the ones ive found exactly. Also do you know if these mushrooms have psilocybin in them and are they edible.

Hi, I found two clumps of the same fungi growing at the stump of a cut down Silky Oak tree. I didn't know what they were so checked with the Australian Botanic Garden at Mt Annan and Tracey Armstrong very kindly identified them for me from some photos I'd sent. They look quite spectacular but I needed to check if they were toxic or not - fortunately it seems they aren't. Just to let you know they are growing in Gladesville. I also have had some very pretty and delicate fungi come up after some rain, again not one I know but these wouldn't have been seen by children so didn't try to find out what they were. They have very fine long stems up to about 9cm high topped with a very delicate pale silvery cap. Anyway your blog was attached to the info Tracy sent me so I thought I'd add to it. Thanks Lorraine

They still come up every year at Greta.... see my shots on my Flickr site, old and new photos, some on my property, Harpers Hill Greta NSW

Gymnopilus junonius
( I believe to be )
April 28 2012 at base of live eucalypti in my garden, Greta NSW
http://www.flickr.com/photos/orgasmictomato/7122789301/in/photostream

You may add them here if you wish.

I note your Gymnopilus junonius are at the base of Eucalypt maculata, and mine were at the base of an introduced pine. I haven't had a look around Greta for fungi lately - the small patch of land with conifers next to the sports ground where I used to look for them has now been fenced off.

I had a look at your photos and I'm surprised to see the Fly Agarics at Greta. I'd love to see them there but don't know where to look. Obviously they are under pines.

Thank you for your sightings.

Had not returned here 'til today.... noticed your comment and that ...... " piece of land now fenced off" may be my property..... 5 acre 1st from Hwy... has many fungi this season...
fly agarics everywhere... hundreds of saffron milk caps,slippery jacks, rustgills but haven't found any stinkhorns this year as yet, but we do get them here.... other fungi as well but do not know them all.....
Many are melting into the lawn at present with the recent rains....
see my Map on Flickr site for location...... still have many of the pines left... here.

Thanks for your blog. It has helped us find out what we currently have in our garden. We have had people come in and ask to take photographs and I must admit they do look rather good. Pity they are bitter and of little value other than their looks.

Ours are growing on the stump of a recently cut down maple tree [it had died from drought and water restrictions]. There are conifers all around it. Still it makes you wonder where the spores [or whatever] actually come from in the first place.

These are very common in SW WA too Gaye, occurring early in Autumn each year. They favour Marri (Corymbia calophylla) but can also be seen on pine stumps.

They have a very bitter taste which I discuss on my blog.

Reading Pete's comments, they sound more like they might be Armillaria, with which these could be confused if one doesn't investigate the spore colour.