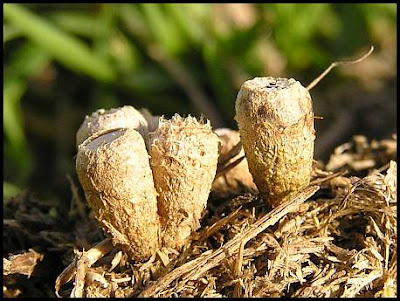 Cyathus stercoreus are Birds Nest Fungi belonging to the family Nidulariaceae. The small cup-shaped light-brown fungi are shaggy when young, losing some of the woolly texture as they mature, and typically grow on herbivore dung or manure enriched soil. The specimens I have seen have been up to approximately 6mm wide at the top by 10mm high. I have observed them growing singly, in loose groups and in tight clusters.


As the fungus matures, the flat top splits and peels to reveal smooth, grey, flattened and roughly circular packages which contain the spores. These packages are called peridioles, and somewhat resemble eggs in a nest, hence the common name of Birds Nest Fungi.


Mature Cyathus stercoreus, growing in manure enriched soil in my garden, have split to expose peridioles 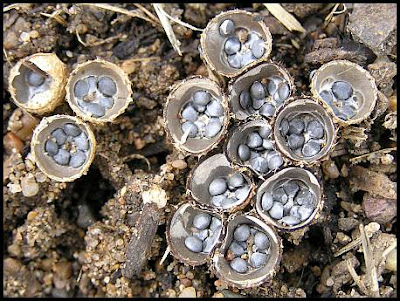 An important identifying feature of Cyathus stercoreus, is the smooth non-grooved inner walls of the fungus. Some other species of Birds Nest Fungi also have dark peridioles, but have a grooved or furrowed inside surface.
Raindrops displace and scatter the peridioles, which then can be injested by herbivores without harm to the spores. Once passing through the animal, the spores then have a fertile growing pad in their new dung substrate. As far as I am aware at this stage, the peridioles can also decay due to weather, and release the spores, but I am looking for more information on this.
But herbivores, like cattle, are particular about their eating habits and will usually not consume grass immediately next to a cow pie, so the peridioles must be flung a reasonable distance by the action of rain. Upon close inspection, each peridiole has a tiny 'button' on the underside. As the peridiole is ejected, it has enough momentum to uncoil a sticky 'string' from the before-mentioned button, flying through the air and sticking to vegetation it comes in contact with. There is easy-to-understand reading and diagrams on this interesting ejection proceedure here.
And here is a key for Birds Nest Fungi. It is not Australian, but I keyed out Cyathus stercoreus and arrived at the right species. Cyathus stercoreus is found in many parts of the world, but I am not sure how widely it is distributed throughout Australia.
A mature Cyathus stercoreus fungus splits 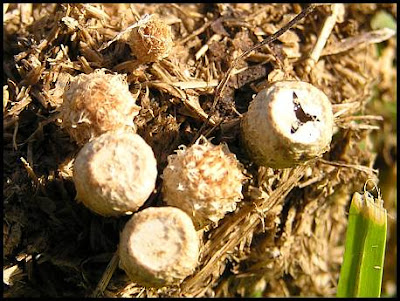 Hunter Valley NSW - On bark mulch that has not be enriched with compost or manure - Apr. 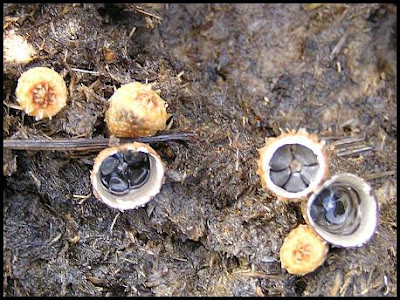 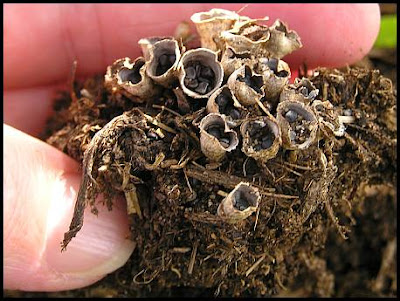 A fascinating little fungus Gaye, only wish I had them near me. Do you know its distribution? Is it an indigenous species?

How would this fungus handle the dung of native species? Emu dropping may be compatible in size a texture with cow dung, but what the small dryish dropping of macropods?

Very cool. The wilted ones look familiar to me, but I can't say I have noticed the mature ones before. Should have kept a more keen eye, did live on a farm for most of my life!

hello Jack, there is a lot I haven't been able to find out about this species yet. It is found in many countries, but I haven't found any information as to if it native or introduced to Australia, or indeed its distribution throughout Australia.

Interesting questions about the compatibility to native herbivore dung, too. The cow pats I have seen this fungus growing on have all been quite old and very dry. I'll be taking particular notice of kangaroo and emu droppings when I encounter them from now on.

When I first found this fungus while wandering the paddock adjoining my backyard, I was very intrigued, and still am.

I'll update the blog entry when I do find out more particulars and have more sightings.

Thank you for your interest.

hello Evan, thank you for your interest.

Even if we are interested in nature from a young age, I think as we mature we tend to take more notice of the details, ask more questions, and are more enthusiastic about learning.

I know this is true of me, anyhow. I also lived on a dairy farm for many years, but obviously didn't take full advantage of the opportunity to discover details around me - could have had something to do with working and raising a family too :) Having time at my disposal now in middle-age is a luxury that I really appreciate.

I've linked to your blog from my own (http://kipili.com/?p=72) under your interesting post on Cyathus. I've posted a photo of a similar species in Sydney (which may be the same).

I'm pleased you found my blog (presumably by searching Google?).

The Birds Nest Fungi are certainly odd and interesting little things. I have them coming up in a mulched garden too, but mainly find them growing from cow pats in a grazing paddock.

I agree that your species is probably the same as I have featured in my blog entry that you have linked to - ie Cyathus stercoreus. The features of slightly shaggy exterior and smooth and unridged interior, along with slate-grey peridioles all point to this species.

Recently I have found two more species which I haven't spent much time attempting to identify yet, but will. One has brown peridioles, and the other has cream.

I like your blog and will check it out at length.

I found a couple of these odd little fellows beneath my basil this morning and some research has brought me to your blog.

I felt obliged to let you know I am living in Townsville, North Qld. It appears our little friends have quite a reach considering at one stage they were tethered to the mother pod. Good for them.