I think it's appropriate that the 50th fungus that I post to my blog be a semi-arid area species, as I've taken such an interest in nature of the dry northwest country of New South Wales.  Contrary to my initial assumption that fungi would be few and far between in the sand of the inland, I've discovered some extraordinary fungi as well as flushes of a wide variety of species after soaking rains.
Podaxis pistillaris is one such strange fungus of arid and semi-arid areas.  Pronunciation is Pod-axis piss-till-are-iss, and its common name is Black Powderpuff. 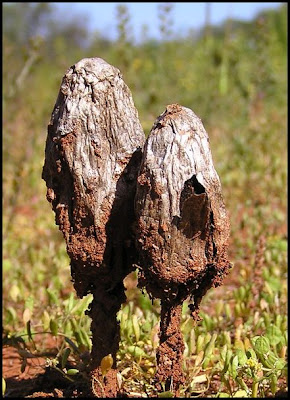 This stalked puffball is reported to be reasonably common under the right conditions, but I've only been lucky enough to find one outbreak.
The club-shaped cap on rigid woody stem can reach a total height of about 200mm.  Fresh specimens have caps covered by a white skin that ages to patchy or scaly dirty white, to eventually become wrinkled.  Matured cap skin then cracks and falls off in flakes or pieces, revealing a dark brown spongy spore mass.
The dense, dry, powdery gleba is not a tightly packed mass that ends up falling apart quickly when exposed to the elements of wind, rain and animal movement.  When I touched one, it was obvious it had a fine knitted texture like sheer panty-hose stretch silk fabric, and when picked at, released dark brown (almost black) spores in powdery puffs.  This feature, combined with a sturdy fibrous stem extending into the gleba, means the fungus persists under whatever climatic conditions are dished up, allowing the spores to be distributed over time.
Podaxis pistillaris inhabits open situations growing singly or in groups in sandy or clay soils, and is saprotrophic (obtains nutrients from dead or decaying organic matter).
Fungimap Australia has recorded Podaxis pistillaris throughout inland Australia, but not Tasmania. It is also found in Africa and South Africa, Afghanistan, Brazil, USA, Pakistan, Iran, and other countries with semi-arid or desert eco-systems.  It has not been found in Japan or Europe. 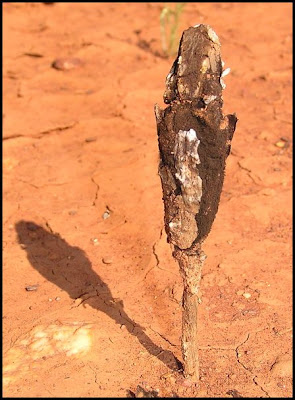 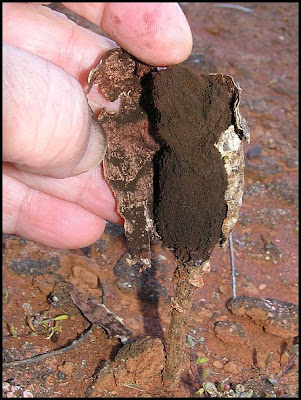 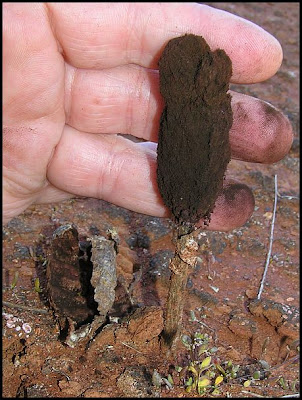 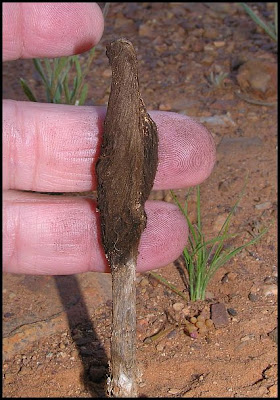 My sightings of Podaxis pistillaris
[This will be updated with new sightings]
Cobar, NSW - sand and clay bush tracks and roadsides after rain, Sept 2010.
*****  *****  *****
Uses for Podaxis pistillaris:  The fruiting bodies of P. pistillaris are used in some parts of Yemen for the treatment of skin diseases, in South Africa as folk medicine against sunburn. In other countries, e.g. India, Afghanistan and Saudi Arabia, they are used as food.

Preliminary experiments have been conducted on the artificial cultivation of Desert mushroom (or Black Powderpuff), Podaxis pistillaris, at Sindh Agriculture University Tandojam. The results reveal that it can also be easily grown as that of other cultivated mushrooms with a little difference.
In Australia, the fungus was historically used by Aborigines to darken the white hair in the whiskers of old men, for body painting and as a fly repellent.
Medicinal properties:  Podaxis pistillaris have been reported to be used in China to treat inflammation but there doesn't appear to be any scientific evidence that might support this usage. Water extracts from the mushroom have apparently been shown to have carbohydrates with beneficial effects on the immune system in vitro. [Some reading here]
Posted by Gaye at 7:30 pm

Interesting post, Gaye, and good to see you getting back to Fungi, with an arid zone species.
Strange the way the skin peeled off, leaving ht "fluffy stuff" more or less intact.
Regular puff balls are quite different, and the hard "horse dung fungi" just crumble, once split.
Cheers
Denis

it's difficult to describe the texture of the spore mass once the outer skin has shed, but it's sort of all intact, and if you tried to break off a hunk of spore mass like, as you suggest with the 'horse dropping fungus', it is completely different, and your finger tips just take hold of sort of another 'skin' that is like stockings, as I said in the post. It was very odd, and so very interesting.

As yet, I haven't seen this species around the Pilliga, but I think I should end up coming across it. So many of the dry country fungi, mostly puffballs, have amazing features.

glad you enjoyed it - I hope to post a new fungi to my blog every week now, probably Wednesday.

Fungi season will be upon us in a couple of months, and I'm really keen to get out and do some hunting this season. I plan on taking a trip to the pine plantations of Hanging Rock south of you. It's proven to be an excellent fungi hunting grounds on previous trips.

Hi Gaye
All your posts provide such great information - thank you.
Just thought I'd let you know your Fungimap link no longer works as RBG Vic have changed their website. Link is now http://www.rbg.vic.gov.au/fungimap/home
Thought I'd let you know as there may be more interest in Fungimap given the next Conference is in July this year in Denmark WA
Cheers & thanks again
Bev

thank you very much for your assistance. I appreciate reader feedback and comments very much. The link is now fixed, and it's about time I checked all other links, so once again, thank you.

I love your blog which it does have many benefit and interest matter.I have been fallowing your page. I use English not well. I hope you don't mind

I'm so impressed. Fungi would be so much more fun if I took the trouble to learn their names, what they do. Especially as I draw and teach Permaculture. I need a fungi friend, I think, to 'innocculate' me with knowledge.
I walk every evening on a lovely mountain path, when I live in Japan, and its a symphony of fungi. The Crescendo in June is like Disneyland.
It would be great walking there with you.

thank you, and I'm glad my blog was of help to you.

Walking on a Japanese mountain (with the recent disasters in that country behind us, of course) with someone who appreciates nature would be a joy.

I'm pleased you are enjoying my fungi observations. Thank you.

I came across your blog as I was researching what I recently noticed growing in my front yard. I live in Arizona and have never seen these until a few days ago. It was quite strange to discover them. Haha. Thanks for the info!