Although this terrestrial polypore is reasonably common, it's always a treat to see. It has a distinctive satin-like sheen which is caused by the pattern of shining radial surface hairs. It is delicately zoned with concentric bands of cinnamon brown with a central depression, often vase-shaped. 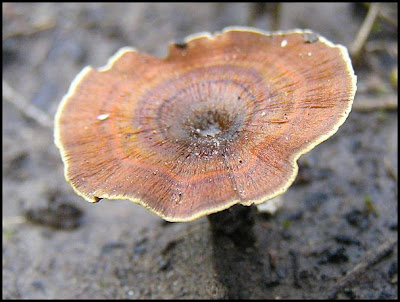 The cap of Coltricia cinnamomea can be up to 5cm wide, but I haven't seen any that big. I've commonly seen fruit bodies up to 3cm. Fruit bodies are often joined to other fruit bodies, and can grow around and incorporating twigs and debris.

The dry, velvety, shiny cap can't be separated from the pored lower fertile surface. The pore layer is pale cinnamon-brown to yellow-brown, with 2 to 3 pores per mm. Spore print is yellow-brown.

Stem is 1-4 cm long, 1-3 mm thick, central, round to compressed, solid, finely velvety, and equal except enlarged at the base. Stems can sometimes be fuses with other stems of the same species. The whole fruit body is tough and leathery.

Coltricia cinnamomea is a wood rotting fungus and grows from decaying sub-surface wood and tree roots in forests and woodland in a variety of soil and climates. Besides Australia, this small polypore is found in North America, but I am unsure where else around the world it occurs. 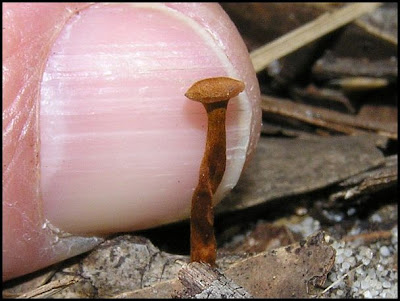 A shiny vase-shaped specimen growing amongst lichen.
Notice the cup fungi, Aleurina ferruginea to the left. 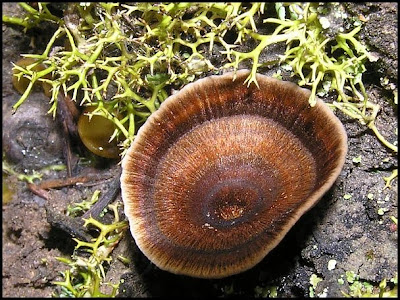 Pored lower surface of a fresh specimen can be whitish 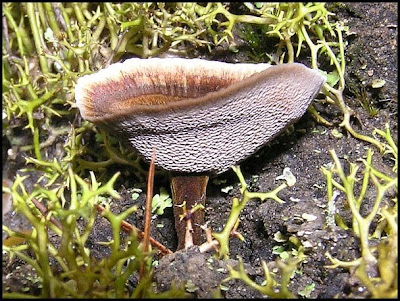 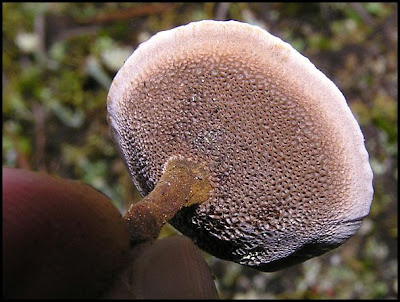 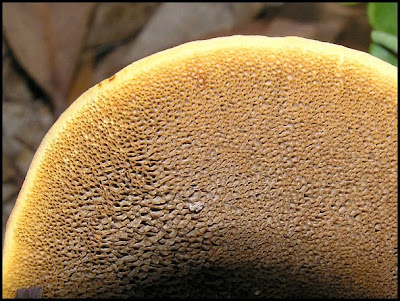 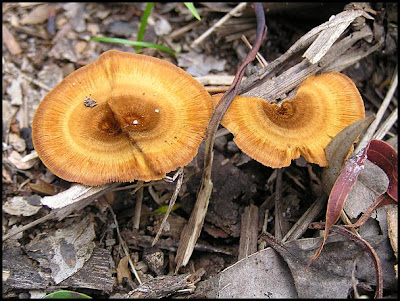 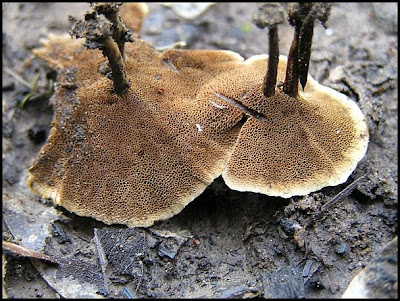 Coltricia cinnamomea is inedible, but can easily be dried for ornamental purposes.
Posted by Gaye at 7:00 am

hey man nice finds! how did you spot the one the size of your thumbnail?

Hey man im just like you, an amataur mycologist, but u put a lot more effort in than me!

How funny, as a child I saw these all the time, I grew up in the country with lots of trees and ferns around and an abundance of mushrooms. Yet when I look at them now with older eyes I see such beauty. Thanks for sharing your gorgeous photos! Patti

you're welcome, and thank you for stopping by my little corner of the Internet.

I agree, as we mature, we appreciate that which was once just an ordinary moment of our day. We are much richer for our appreciation of the 'little things'.

Your blog is fascinating.

thank you. Your blog sounds interesting, and I'll check it out in more detail soon.

For you update section.... I have found these growing plentifully in the Katoomba area of the Blue Mountains after our recent bushfires and heavey rains.
Date Apr/May 2012