Trametes versicolor is a bracket fungus found in a variety of habitats and substrates. Commonly called Rainbow Fungus, Rainbow Bracket, or Turkey Tails, it has previously been known as Coriolus versicolor.

This common wood-decaying fungus often forms extensive tiers on dead logs, branches and structural timber such as fence posts. It can also parasitise living trees. I've found it in damp forests in the Great Dividing Range in NSW and far north Queensland. 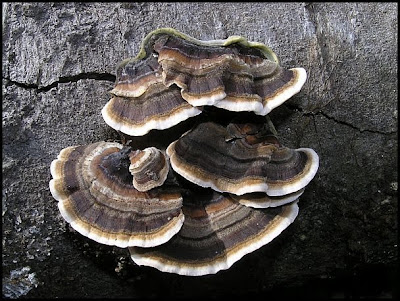 Besides occurring in Australia, Trametes versicolor is one of the most common fungi in the northern forests of the world, in Europe to China and Japan, from Siberia to the US and Canada. "Trametes" means skinny, and "versicolor" means multi-coloured.

Brackets can be up to 70mm wide with a radius of 50mm, often larger and forming flexible shelves. Brackets are thin, leathery, relatively flat, but can be 'wavy'. Minute hairs give the upper surface a velvety appearance, with zones of grey, greenish, bluish, rusty-orange or brown, and often have a white margin.

The fertile undersurface is white when fresh, discolouring to cream and then brownish, with minute pores of 3 or more per millimeter. Spore print is white. 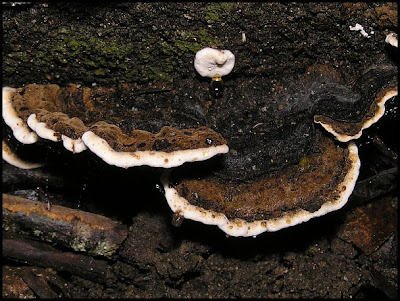 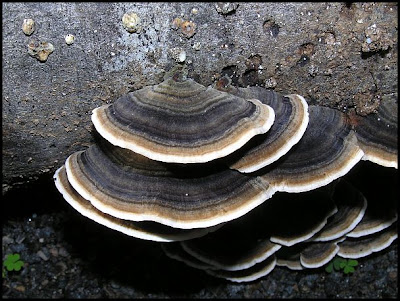 Colour of brackets is very variable 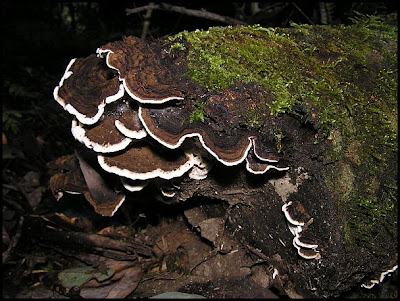 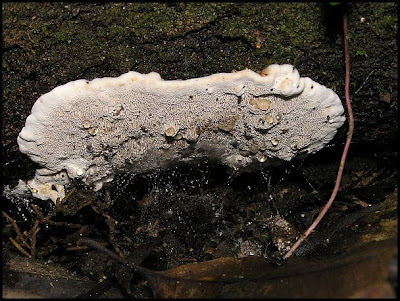 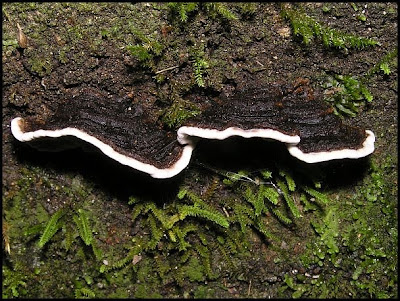 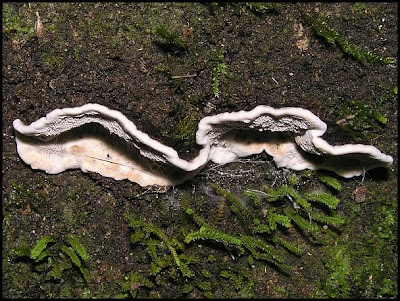 A mass of faded Trametes versicolor 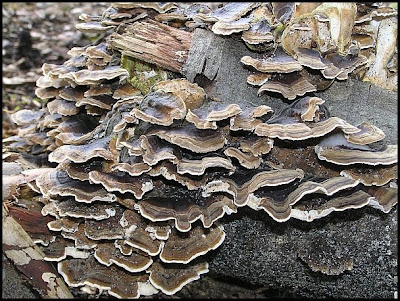 My sightings of Trametes versicolor
[This will be updated with new sightings]
Barrington Tops National Park, NSW - on stumps and fallen timber in rainforest, Jun 08, Jul 10.
Paluma, North Qld - stumps in rainforest, Aug 08.

***** ***** *****
Research and uses: Trametes versicolor is medically significant, most importantly it is known as being a natural source of the anti-cancer polysaccharide PSK. PSK (polysaccharide K) is a high molecular weight carbohydrate found in the fruitbodies and (in higher concentrations) in the mycelium.

more info on cancer research with T. versicolor
Trametes versicolor can be used for dyeing wool, some fabrics, or paper and will yield a brown color with wool when ammonia is used as a mordant (colour fixer).
Some information on dyeing with fungi

This member of the polypore family has a long history of medicinal use in China and Japan, where it is known as Yun Zhi and Kawaratake, respectively.
Posted by Gaye at 6:35 am

Great post, thanks. Beautiful colouring! Love it.
Thanks for the link for the dye.
Regards.

you're welcome. Your request to provide information on fungi uses has challenged me to do extra research and I've really enjoyed coming up with interesting details to share.

I've been asked by the director of the Institute for the Environment at Newcastle to make a presentation at their Fungi Forum 3rd December, and I'm going to try to get something together to present regarding uses of fungi, both present and in times past. I want to conduct several experiments so that I have some personal experience to share.

Thanks again, for taking the time to put this together Gaye. I LOVE IT!
I've seen this bracket fungi on tree stump in a childrens playground in Fivedock. It amazes me how spores still travel to reproduce in such built up areas.

when you get your eyes tuned in to spotting fungi, they seem to pop everywhere. I'm glad you're enjoying them in such accessible places.

Hi, I just wanted to leave you a thankyou note to say that i have found your blog very useful.
Cheers.

Thanks Gaye for keeping us informed .
I wonder if anyone has come across this fungi species in south east Qld, namely in the Blackall ranges/ sunshine coast. Also does anyone know if the False turkey tail or Stereum ostrea is found in habits of Trametes versicolor ?
I live in the Glasshouse mountains area and i 'think' i have seen T. versicolor, but of course want to be sure. i'm very intrigued by the medicinal properties of our fungi kingdom !