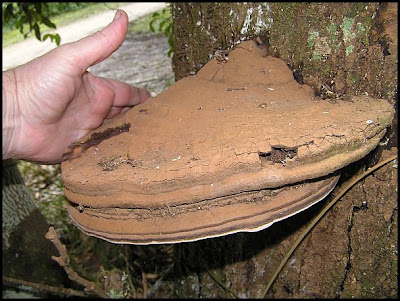 Ganoderma australe from family Ganodermataceae was previously known as G. applanatum. Fruit bodies can reach 600mm across on living trees causing white rot which will eventually kill the tree. It can live for several more years on the dead stump. It is found near the base of trees, often at the site of an old wound.

A new fertile layer is added each year. The minutely pored white undersurface readily bruises dark red-brown when scratched or bruised. Messages written on the white pore layer become permanent when the fungus dries, consequently it is sometimes referred to as 'Artist's Conk'. Spore print is brown.

This wood-decaying fungus is found in wet sclerophyll forest and rainforest on native or exotic trees. The shelf-like fruit bodies are generally fan or hoof-shaped, dry, brown, and often cracked. The brown bracket often has a white rounded margin.


Note the radial growth zones, and the fine cracks 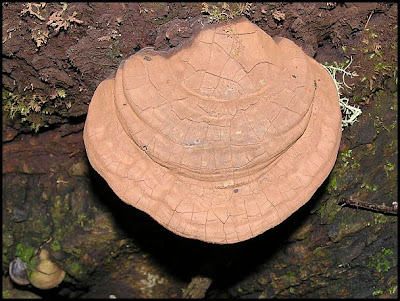 This Ganoderma australe fruit body in the rainforest of Barrington Tops National Park on a living tree is about 300mm wide, and 50mm deep. 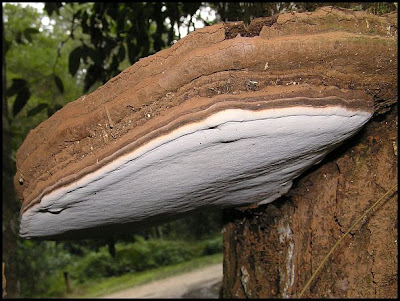 The white pored fertile undersurface immediately
bruised dark red-brown when I scratched it. 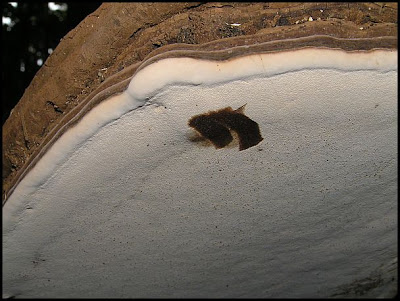 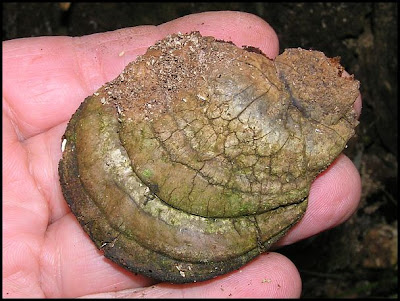 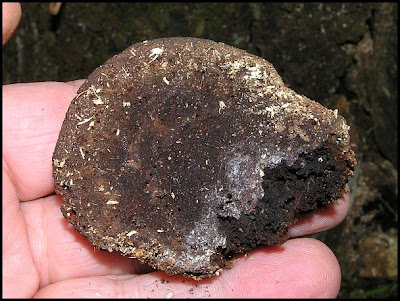 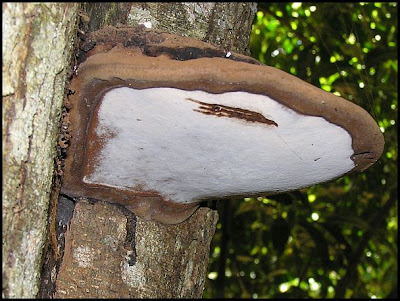 My sightings of Ganoderma australe
[This will be updated with new sightings]
Barrington Tops National Park, NSW - on living and dead rainforest trees, Nov 07, Jul 10.


***** ***** *****
Woody polypores of the Ganodermataceae family have been used in Asian folk medicine for centuries. Collectively, the Ganoderma are being investigated for a variety of potential therapeutic benefits.

There is apparently potential for Ganoderma species in bioremediation. Bioremediation can be defined as any process that uses micro-organisms, fungi, green plants or their enzymes to return the natural environmental altered by contaminants to its original condition, eg: clean up of oil spills.

Excellent. I would love to find this fungus and see if it can be used as tinder.
Good post, thank you.

Next time I go to the Barringtons I'll collect one and see how it burns.

Laetiporus portentosus apparently burns slowly so should make good tinder,and it should be available in your area. I saw some today, and on my way back past them in a couple of days time, I intend to collect one and set it alight to test out the potential for tinder.

Another nice posting gaye, although fungi season has pretty much ended here in Western Australia i think, come today, the first day of spring, september 1st, will have to look forward to next year now. Should make some fun hunting come june next year, seems to be the most prolific month here in WA for fungi hunting, i guess also because it's the wettest, they seem to spawn everywhere.

yes, fungi are really slowing down here too, despite good rain. But I'm always hopeful whenever I'm out and about. Surprisingly, a few Coprinus species have been popping up. Puffballs seem to be the most prolific fungi around at this time of the year where I've been, and they're always interesting (and difficult to identify unless they have readily recognisable features.

I have missed my Tuesday fungi post this week, due to lack of time, but hope to get one up tomorrow.

I'll be over in WA for a couple of weeks in November, and will be looking forward to late flowering native flora.

Just wanted to inform you that you got the species wrong, Ganoderma australe and Ganoderma applanatum is two different species of the same genus.

Thank you for your comment regarding misidentification. I'll check into it.

This interesting scientific ideas, and help give a partial explanation for the doctors in naturopathic, herbal medicine and have not experienced people to understand that today's most serious health problems compared to what could be called. healing or medicinal fungi of great assistance.