Many years ago when I first saw the distinctive spotted red toadstool Amanita muscaria (then nameless to me), I couldn't believe my eyes - I'd previously thought they were only fanciful creations of fairy tales. But there they were growing on a grassy bank beneath big old pine trees in the NSW Southern Highlands, right beside the road.

I've since found them several times in the pine plantations of Hanging Rock in the mountains south east of Tamworth, NSW. They make a spectacular sight.

A cluster of Amanita muscaria at all stages of maturity
Hanging Rock pine plantations, April 2003 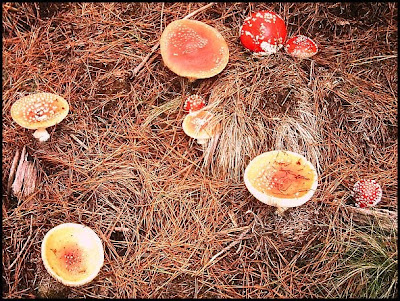 Amanita muscaria (pronunciation: Aman-ee-ta musk-air-ee-ah), is commonly known as Fly Agaric. It is an introduced poisonous fungus.
Habitat: Amanita muscaria is a micorrhizal species found on the ground and in leaf litter, mainly under exotic conifers and broadleaved trees. It occurs in large groups, and is common. Of some concern, it is extending its range into some native forests. This spread will change the ecosystem, causing decline or elimination of some native fungi.

Characteristics: In its mature, but fresh, state, Amanita muscaria is unmistakable with its bright red cap dotted with white 'warts'. Immature fruit bodies are completely enclosed in a white membranous universal veil, which ruptures to form the cap scales and volva. The cap diameter can be as large as 250mm, with the white shaggy stem as tall as 220mm. The stem is bulbous at the base, with a high skirt-like, soft, white ring. Gills are white, close, and of various lengths. Spore print is white.

An immature fruit body of Amanita muscaria encased in a dry, white, scaly covering that will separate with the expansion of the cap, to form the white 'warts' on the red surface. 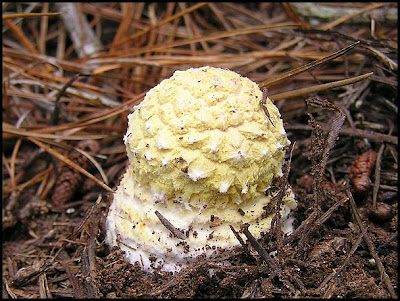 Note the concentration of remains of the universal veil around the rim of the cap. Also note the white skirt-like ring that is edged in an orange-buff 'frill'. 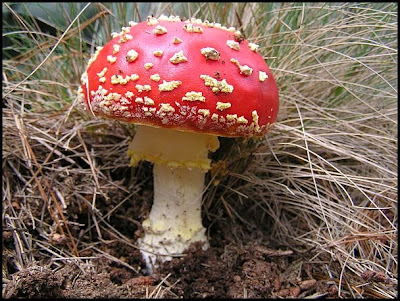 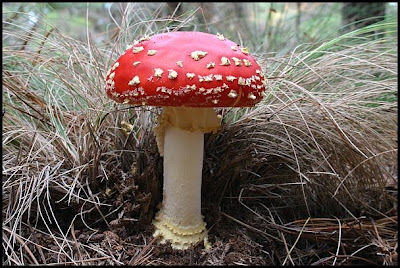 A tall specimen need not have an equally large cap. Note the scaly bulbous base, and the 'frilly' ring high on the stem. 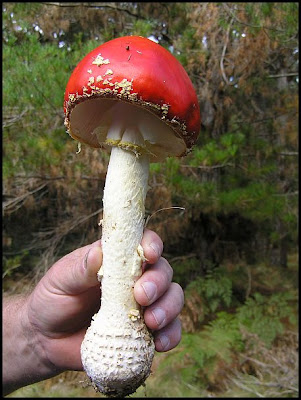 With age, the cap of Amanita muscaria may flatten
out and turn up, fading to orange. 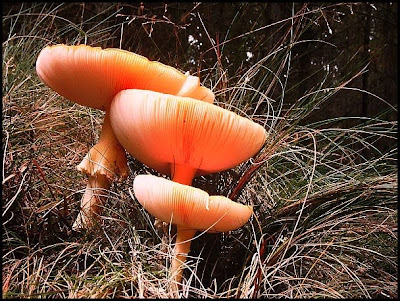 ***** ***** *****
It is thought that Amanita muscaria probably originated in Asia or Europe. From there it spread to cover most parts of the northern hemisphere. In more recent times it has been transported (unintentionally by humans) to areas of the southern hemisphere.
Today it can be found scattered across the globe, from places as far north as Alaska and Siberia to areas as far south as Australia, South Africa, and South America.

The name of the mushroom (muscaria) is reportedly derived from the Latin word musca, which means fly. It was traditionally thought that this was because Amanita muscaria was be used as an insecticide to kill flies.

However, there apparently exists no firm evidence the Fly Agaric was ever used in Europe (as a fly killer) before medieval times. Rather, it has been suggested this is a linguistic reflection of the apparent narcotic potency of Amanita muscaria and its shamanic and religious past.
Posted by Gaye at 7:00 am

Good post, thanks. I have never seen this one for real, but as you say, famous in fairy tales.
Regards.

My heart is broken as I see this post. Here in Russia one may found many places to see this beautiful mushroom but not this hot and dry year :(
In fact if you cook amanita muscaria at proper temperature it is not poisonous at all. And the fact that it is hallucinogenic is a common myth. There are no hallucinogenic substances in it. Also it is called fly agaric because of the fact that gnats often chose these mushrooms to lay their eggs in.

thank you. I suppose it's the lack of pine plantations in your area, but with the magnificent native forests you have around you, you will never be short of fungi. I went fungi hunting in the New England NP in May one year, and was simply astounded by the variety and numbers of fungi. I'd love to get back up there in Fungi season.

thank you for your comment and your knowledge about Amanita muscaria. Unfortunately, the weather seems to have gone mad all around the world, with devastating floods and horrendous droughts. Eastern Australia has been very fortunate over the past 6 months to receive drought-breaking rains. I hope the rain clouds break over you soon.

I see plenty of them every year in the Dandenong mountains in Victoria. Very pretty and one of my main signs to start hunting. But I found it was a very short season for fungus in general this year.

thank you for the location of more Amanita muscaria.

I have found it to be a long fungi season where I spend most of my time (ie: the Hunter Valley NSW, and northwestern NSW in the Pilliga Forests area). Good, and regular rain has been received.

I have just found your post, linked through the Nature of Robertson. It looks most interesting and will be of great help in developing my (currently negligible) knowledge of fungi.

This post on my blog http://franmart.blogspot.com/2010/06/more-on-fly-agarics.html may be of interest to you. There are a few fungi posts scattered through it.

On the Monaro it seems to have have been an excellent fungus year. This may be because we have had a lot of rain, with more on th way!

thank you for leaving a comment. What a remarkable Amanita muscaria find amongst the cork oak plantation at Canberra. Thanks for linking the post here.

I've found that in most places I've been over the last 2 months in NSW, there have been excellent fungi numbers and variety - exciting stuff.

Lovely blog. I chiefly hunt mushrooms for food - and can comment that suillus luteus is lovely fried up and will dry very well for addition to soups when mushroom season is over. I'm surprised to read the comment that amanita muscaria is OK to eat, but after looking further see that boiling and discarding the water does the trick. Who'd have thought. But I detest boiled mushrooms, so I'll hold back :-)

I live in the southern highlands, amanitas grow like goddamn weeds.

i live near The Great Dividing Range , one hour north of Melbourne. Ten years here and we have this mushroom. My geese are dying ( 5 in the last fortnight)for no apparent reason. Would anyone know if they eating the 'Amanita Muscaria' , could that be the reason?
Cheers
Wendy

regarding your dying geese, it is commonly thought that domestic animals have no built-in instinct which allows them to distinguish between poisonous and healthy food items, so I can only suggest that you remove Amanita muscaria fruiting bodies as soon as they appear in the feeding grounds of your geese.

Good luck with it.

hi there, great blog!I found it while looking for the scientific name for this species. I am a bird photographer but occasionally will shoot the odd species of flora when birds are scarce. I took a photo of this toadstool on a whim as they remind me of childhood fairytales. They grow around here in Gippsland, Victoria quite prolifically, but since reading your post I realise they are most likely here due to the many pine plantations present where native forest has been replaced (ie: destroyed). I see a lot of fungi species in Walhalla, which is an old gold mining town in the foothills of the BawBaw and Alpine Ranges.Great place to visit for history buffs, birders, nature lovers, camping, hiking, and general tourism. Its a little bit like Sovereign Hill but on a smaller scale and much, much more picturesque.

Hi, and I'm glad my fungi blog could be of assistance to you.

I'm also a keen birdwatcher - what a satisfying and rewarding and relaxing pastime.

Has anyone ever heard of them growing in Queensland? If not what would be the closest location to Queensland that they do grow? I am surprised to see a post suggesting that the Amanita Muscaria has no hallicinogenic properties. This seems to contradict all research on the Mushroom I have come across. Siberian Shamans are said to of drunk Deer urine after the Deer had consumed the mushroom in order to dilute its potency.

Hi,
I have been told the Amanita Muscaria may be at Mt Glorious near Brisbane and certainly in northern New South Wales, would anyone care to elaborate further, please.
Regards
Zain

you can find them anywhere where there is pine trees in Australia most of the time, when there in season.