A blue mushroom - beautiful! Blue is not a common colour amongst fungi, but the Cortinariaceae family features a few blueish species. 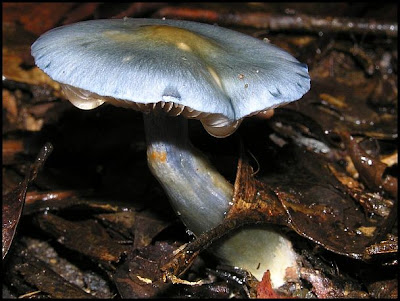 Cortinarius rotundisporus (pronunciation: Court-in-air-ee-us row-tun-dee-spore-uss), has the very appropriate common name of Elegant Blue Webcab. The 'webcap' refers to the cortina, which is a partial veil consisting of a cobweb-like protective covering over the immature spore-bearing surface. Cortinas typically disintegrate as the mushroom matures, disappearing entirely, or leaving a ring-zone on the stem.


***** ***** *****
The cap can grow to 70mm diameter, convex at first, flattening out, often turning up with age. It is a deep indigo blue, paling with age, eventually becoming a rusty-brown tinged with blue. At first, the cap is viscid (slimy), but dries with age. A broad greenish-yellow umbo (central swelling or 'bump') is usually present in mature specimens.

Gills are close together and of various lengths; pale lavender tinged with buff in young specimens, maturing to a rusty-brown. The stem is usually slender and can reach a height of 140mm with a diameter up to 20mm; bluish at the top, and white to yellow at the base; and can be slimy when young. Spore print is rusty-brown.

Cortinarius rotundisporus is reportedly a common species found singly or in groups on the ground in Eucalypt forests and woodlands in temperate Australia.

[Ref: "Fungi Down Under - the Fungimap Guide to Australian Fungi"]


A tiny convex fresh specimen with a maturing one 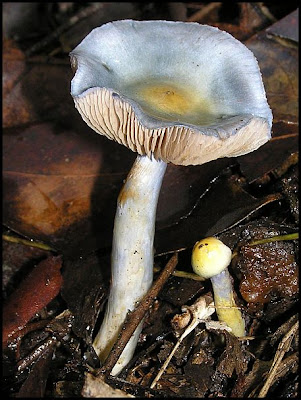 Caps expanding from convex through to flattening.
Note the yellowish umbo on the right-hand cap. 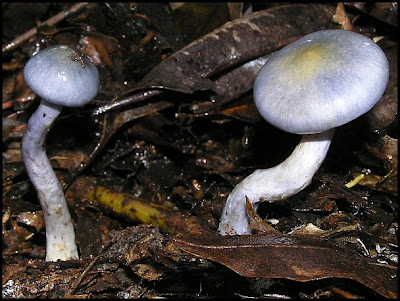 Caps flattening out - note rusty-brown spores
on stem, and cap of smaller fungus. 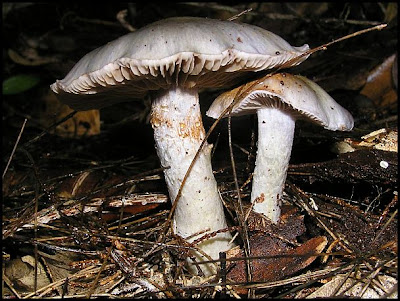 And the cap sometimes eventually turns up. 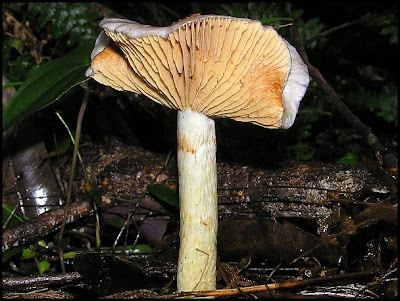 The cap turns a rusty-brown with age.
Note Aleurina ferruginea in the left of image. 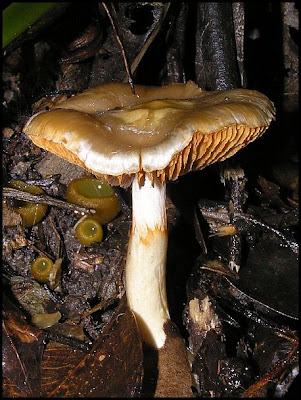 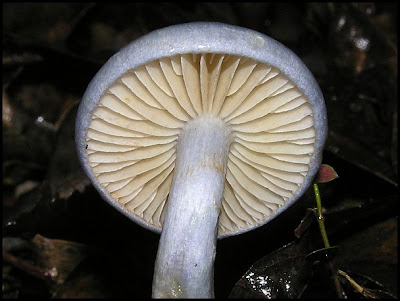 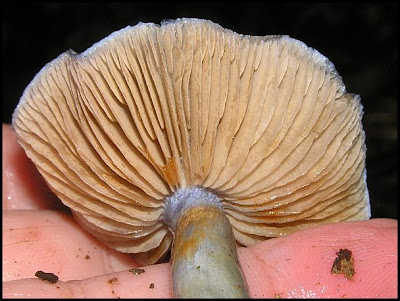 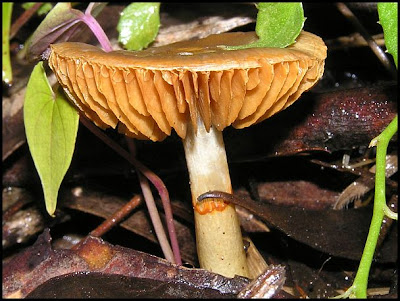 My sightings of Cortinarius rotundisporus
[This will be updated with new sightings]
Brunkerville, NSW - Native forest, Jul 2010, May 2011, Jun 2011.

your photos are fabulous. Actually, I found your photo pages a few days ago and was going to name this one:

Thanks for sharing your photos here. Happy fungi hunting!

I see you are still teaching and learning. Well done.
I really like those steely blue Fungi I sometimes see. Certailylooks the same or very similar, to your Cortinarius.
Cheers
Denis

Yes, like you, I can't see the point in not sharing experience and knowledge - it makes learning that much more rewarding.

I have found these on mitchells pass in Glenbrook, Blue Mountains

Found these little beauties near Lennox bridge, Glenbrook, Blue Mountains. And also at Wentworth Falls lake, Blue Mountains. Been trying to ID these for weeks. I noticed they have a very pleasant cocoa smell.