This is the first Amanita I've featured on my blog, and it is not a typical Amanita - unlike most Amanitas, it has no ring on the stem.

The orange/yellow/red cap is commonly 3 to 5 cms with a deeper colour towards the centre, and paler similar colour warts. The 'warts' are veil remnants and are generally in the centre of the cap. Initially, the cap is convex, flattening out. The cap margin is radially grooved.


***** ***** *****
The stem is 2 to 6 cms, white to pale yellow, slender, and covered in fine white scales. Although there is no ring on the stem of this Amanita, orange remnants of the volva can be present. The volva (swollen base of stem) is white, but has an out-turned lip bordered in orange or yellow.

Gills are white to pale yellow, close together, and of various lengths. Spore print is white. Amanita xanthocephala is a native fungus found singly or in scattered groups on the ground amongst leaf litter in native forests.


***** ***** *****
This Amanita is mycorrhizal, meaning it forms an association with the host plants' roots where both parties benefit. 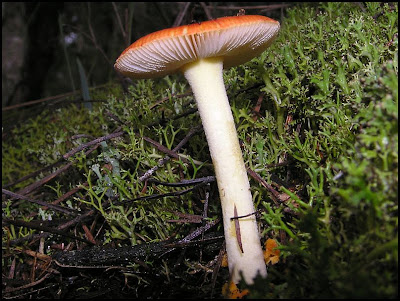 Orange cap with central scales (remains of volva), and striations around margin. Note the orange rim of the volva at ground level. 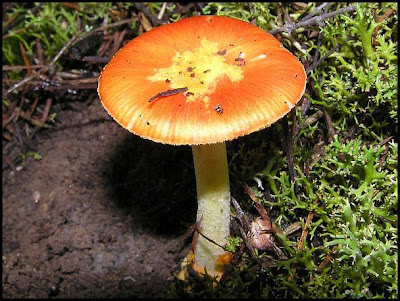 Although Amanita xanthocephala does not have a stem ring, orange volva remnants can be left on the stem. Also, remnants of the volva can cling to the rim of the cap, as shown in the image below. 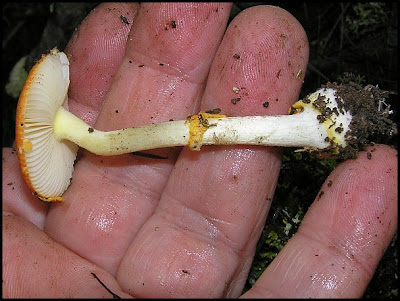 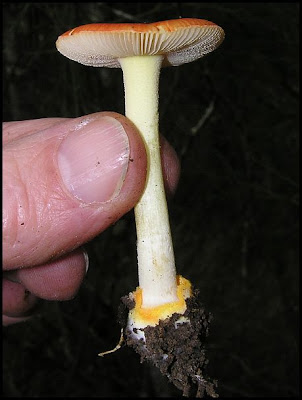 . . .and a close-up of the orange out-turned lip of the
volva, and note the tiny white scales on the stem 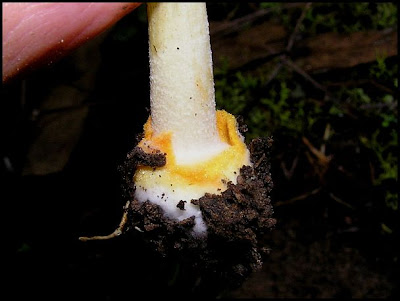 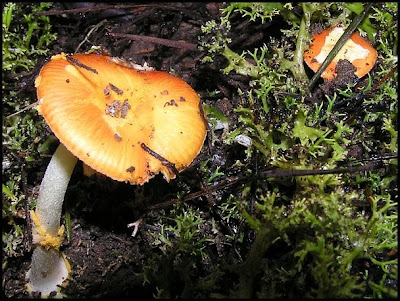 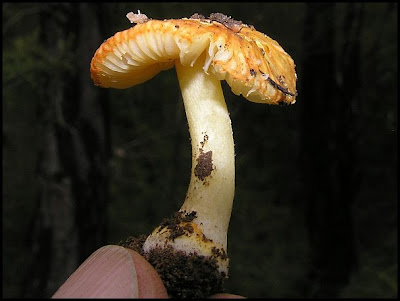 My sightings of Amanita xanthocephala
[This will be updated with new sightings]
Werakata National Park, Cessnock, NSW - on ground amongst leaf litter and lichen in Eucalypt/Leptospermum/Acacia woodland - Jul 2010, July 2011

This is a species that i have seen growing in pine plantations here in WA, infact it seems to be one of the most common fungi there is in Australia. Beautiful looking though, almost looks like Amanita Muscaria. How i wish we had the later in WA. You seem to have it everywhere in the east coast, but it's nowhere to be found here, i wish somebody introduced that beautiful mushroom here!

yes, it is a beaut fungus. I wasn't aware that Amanita Xanthocephala grew in pine plantations.

The specimens I photographed for this blog entry are the first photographs I've taken of this one, and I don't recall even seeing it before, so I will be keeping an eye out for it now, hoping to find more.

Regarding Amanita muscaria, I haven't found it in the Hunter Valley - there are no pine plantations in my area, and I have never found it under scattered introduced pines that occur in parks etc. I have seen it plenty of times though, mainly in the Hanging Rock area in pine plantations. I should do a blog entry on it soon.

I have been trying to gather together information on this fungus from the literature and from individuals who share their data. What I've found is in the process of being posted at this URL on the "technical tab":

I'm impressed with the organization and illustration of this blog post and am interested in working with folks who may have the opportunity to collect this species as it is understood in various parts of Australia. No secrets. One of the things of interest to me is the impression that I get from a limited amount of data that there may be more than one taxon currently going under the name A. xanthocephala.

thank you for your comment, and for the web site that I had not seen before.

The reason I started my blog was to share my observations as far and wide as possible, so anything I can help you with, I will. Although, please understand that I am not a mycologist, but an enthusiastic amateur naturalist.

When you say there is a possibility of more than one taxa amongst the species, do you mean that it will be visibly different to an amateur, or only under the microscope and with technical knowledge?

If differences are visible, what should I look for?

My email address is linked on the right of my blog page if you'd like to contact me via email.