While some species of Boletes are common and widespread, Boletes are not your average fungus - instead of gills on the fertile under-surface, Boletes have pores. Tightly packed vertical 'tubes' are affixed to the flesh of the fungus cap with the 'tube' openings all that is visible. The openings are called pores. The underside of a Bolete fungus is covered in minute pores from which the reproductive spores emerge.

Phlebopus marginatus is likely to be Australia's largest terrestrial fungus, with caps reaching to 1 metre across. A specimen from western Victoria was recorded weighing 29 kg. 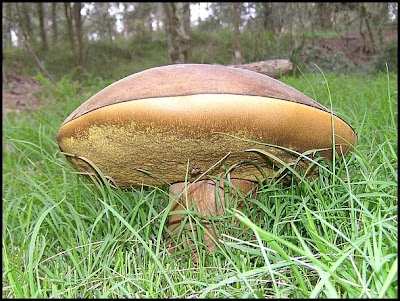 Like many Boletes, the soft flesh of Phlebopus marginatus is a favourite breeding ground for insects, the larva of which cause rapid decomposition of the fungus. The mid to dark brown cap is smooth, and viscid (slippery) when wet. Edges of the cap may be irregularly shaped partially turned up. Juvenile caps are convex.

Flesh is thick and white; the pore surface is a dull yellow, aging to brown. The stem is very thick, pale to mid brown (often with a bulbous base) with a deep indentation surrounding the top where it joins the pore surface.

This large Bolete can be found at any time of year following soaking rain. It is commonly found in eucalypt forest, as well as grassy expanses such as sports ovals and parks. 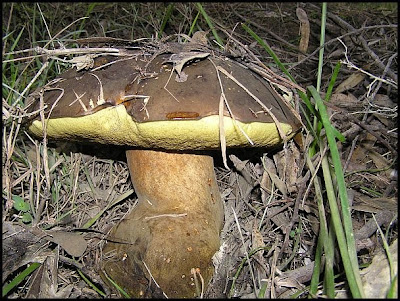 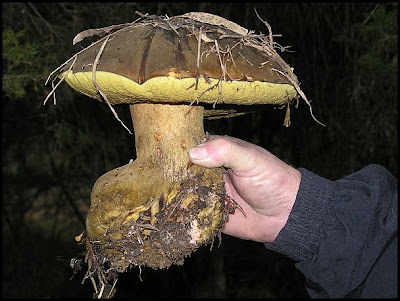 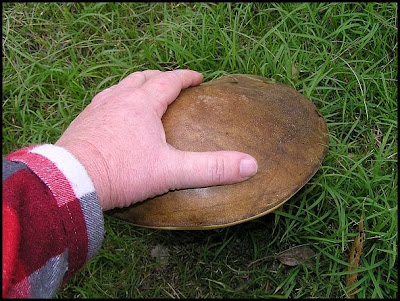 Notice the deep indentation where the stem joins
the pore surface 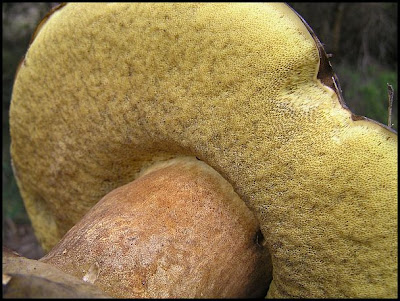 Thick white flesh of a fresh specimen not yet riddled with maggots. The pale yellow section is the crowding of elongated hollow tube-like structures which hold the spores. 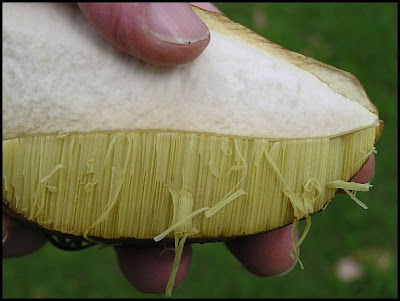 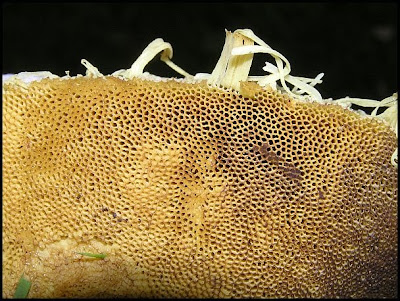 The cap and stalk have darkened with age, and the cap has been damaged. This specimen was growing in lawn at Hunter Region Botanic Garden in July 2007. 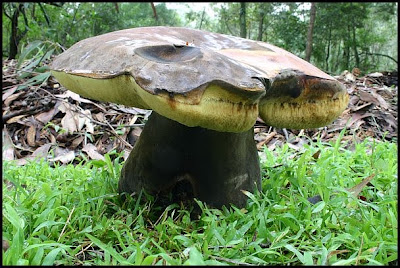 My sightings of Phlebopus marginatus

***** ***** *****
More information on Phlebopus marginatus:
Fungi enthusiast and chemical engineer features this bolete in his blog, including potential edibility: Tall trees and mushrooms.

Does this fungus have any use to man? Eg medicine or tinder?

good questions, thank you. I wish I could answer them.

Having seen how Phlebopus marginatus becomes infested with maggots and consequently collapses, I can't imagine it being useful for tinder. Of course, experimentation will probably be the only way to determine this for sure. ie: collecting fresh specimens before insect infestation, drying and igniting. I like the idea of conducting this exercise.

As far as medicine goes, again, I do not know, sorry.

I haven't heard of it being eaten, but I will ask around on this. With so much flesh, if it was edible in the same manner as Suillus luteus, one fungus would provide several meals.

With your experience with bush skills, are you aware of it's edibility and palatability?

More information on Phlebopus marginatus on 'Tall Trees and Mushrooms', the nature blog of a fungi enthusiast and chemical engineer:

So they are supposed to be edible, but personally I do not know enough about fungi to be able to feel comfortable eating it.

Likewise, I don't know enough to feel comfortable eating wild-collected fungi, but there are people out there who certainly do eat some species of fungi with confidence. Too risky for me, though.

In my blog entry below, I have a picture of the bolete Suillus luetus being prepared for drying.

ABC Radio Newcastle 1233 breakfast producer, Karen Shrosbery, will be interviewing me on air at 7.15am Friday 15th July (tomorrow), regarding fungi and my fungi blog - for those who are interested in the fascinating world of fungi.

So, a star is born! Good luck with the interview, I hate doing interviews.
Regards.

Thanks. I'm a quiet achiever, much more comfortable with listening and writing than I am with talking. But I'll try to make the most of the opportunity to spread the word about some little-known aspects of the beauty and importance of the natural world.

I would be very interested to listen to your interview if it is available as a podcast.

I've had a look at the ABC Radio site, and as far as I can see, it is not available. Following the interview on Friday, I was asked to do an interview on Sunday ABC State-wide, and the producer has posted up a link to my blog, but my journal instead of my fungi blog. I don't mind, however, because I have a lot of useful life-stories told on my journal blog that I am receiving emails regarding them being helpful - so that's all good.

The interview didn't contain anything technical, just general information on fungi and how I got started.

Thanks for your interest. I now have an opportunity to discuss taking part in workshops at the University of Newcastle, so besides spreading the good word about fungi, the exposure has been good for me.

Hi everybody,
Collected mushrooms all my life in Germany and since in Australia I came across this gigantic mushroom and found 7 of them today close to Pearsdale, Victoria. As many information on Google say this mushroom is edible, we cleaned them, cooked them as we do also with pine mushrooms and slippery jacks and finally eat some of them. Unfortunately we dont like the taste at all as it is similar to rotten wood... What as shame! So we put the complete dish with all the onions and baconpieces into the rubbish-bin.
Kind regards