The Hunter Valley has received light showers of rain recently (as has many other parts of eastern Australia), hence the time is right for fungi.

The mycelium (underground mass of microscopic fungi filaments called hyphae) of cordyceps gunnii invades a moth larva, feeding on it and eventually replacing the host tissue. An elongated fruiting body is then sent to the surface to distribute spores to aid in the spreading of the fungus. 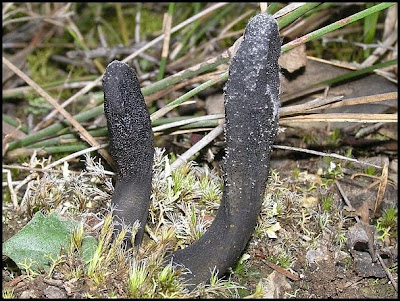 The black club-like or finger-like Cordyceps gunnii fungus fruit-bodies usually appear under mature wattles. The habitat of the examples featured here was Eucalypt, Leptospermum and Acacia woodland. Fruit-bodies have a height of up to 120mm above the ground, are dark olive-green to black in colour, are cylindrical or flattened with a blunt end. The smooth surface is covered in minute dots (ostioles), from which white spores emerge.

The head merges smoothly into a stem - this is an identifying feature, separating it from other dark club-like fungi. The white to pale yellow underground stem can reach 400mm, depending on the depth of the moth larva it has parasitised.

Cordyceps gunnii grows singly or in groups, and is known to be common. I found a colony of more than 20 fruiting bodies after rain.

A copious amount of white spores surrounds
this Cordyceps fruit-body 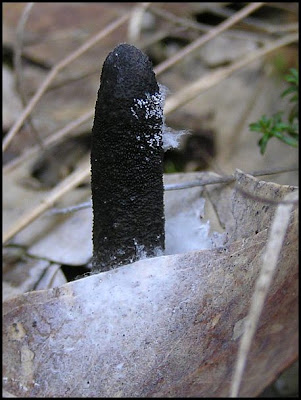 Notice the smooth transition from head to stalk.
My hand gives a size comparison. 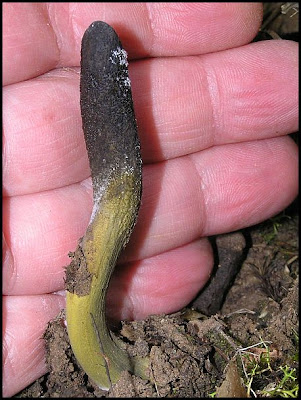 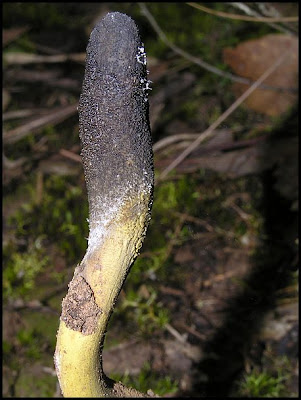 This Cordyceps fruit-body is coated in white spores 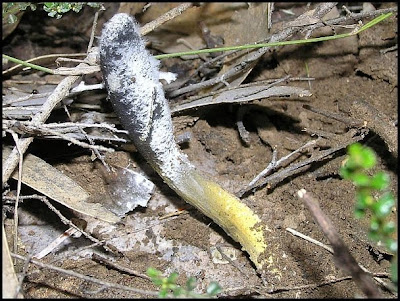 A flattened, rather than the usual cylindrical fruit-body 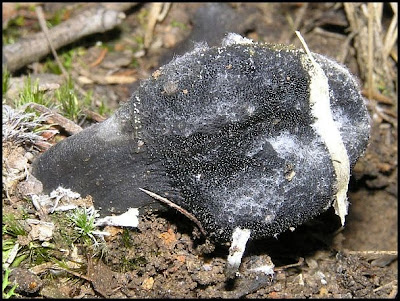 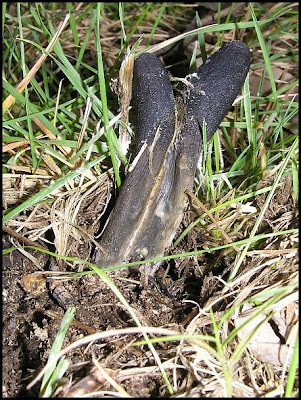 I managed to extract the full stem of this Cordyceps 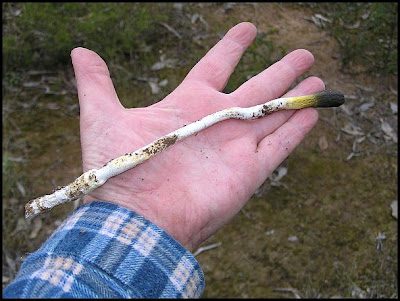 My sightings of Cordyceps gunnii

Congratulations, Gaye.
Gosh that is late. Ours usually appear in March/April.
Nice to be able to successfully dig up an entire specimen/
Cheers
Denis

it's interesting to know when you usually find Cordyceps gunnii down in the southern highlands - thanks. I haven't found it anywhere in the Hunter Valley before, so I am not aware if it has a usual fruiting time. The rains have spurted on the fungi to send forth fruiting bodies everywhere. It really is a great opportunity to observe and photograph them.

I have found three sites containing Cordyceps gunnii in the last two weeks in Northwest Tasmania , not associated with Acacia, one Myrtle ( Notofagus cunninghamii) the second with Dogwood ( Pomoderris apetali) and the third with Leptospermun sp in a boggy, sandy coastal ecosystem. The caterpillars attached to the Cordyceps looked like the empty chrysilises of Emperor Gum moths (Opodiphthera eucalypti),which are flying about at present, found in the same site. These are the first I have found so very excited
Pat

we have had a bunch of these coming up in july in our front garden in south hobart, lawn decorations between a rhododendron and a lillypilly. quite small fruiting heads but

Hi,
Since the time the cordyceps sinensis was discovered, it has become extremely famous in the market. This type of fungus is very widely in use. There has been a great demand of this fungus because of the immense uses in the various fields.Cordyceps
Cheers,
Gaye

Found one at pontville in tasmania, amazing. will keep looking
Paul corrcons@hotmail.com

Found one at mandagery after rain