Green agarics are not common, so Dermocybe austroveneta can often be identified with little trouble.

The cap of a young Dermocybe austroveneta is yellowish-green to dark green in the centre, slightly greasy when dry, slightly slippery when wet, with an umbo (dome-like swelling in centre of cap) that flattens with age. 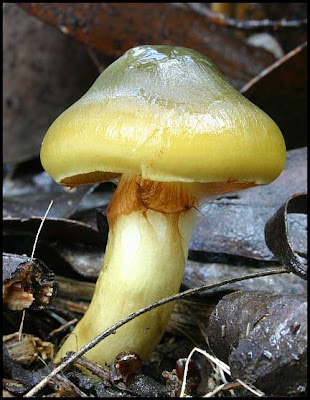 A close-up of the young cap shows the cortina (cobwebby veil, or remains thereof) stained rusty-brown from spores. 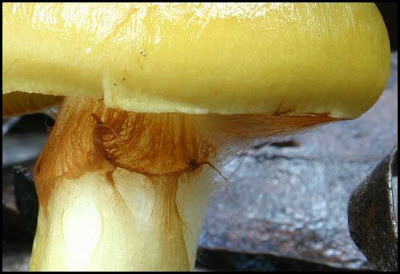 The cap starts off convex, flattening with age. Gills of varying lengths start off pale yellow, darkening to rusty-brown with age. The central white stem can be up to 100mm tall, tapering slightly upwards. The cobwebby veil and fibrous stem stains rusty-brown from maturing spores. 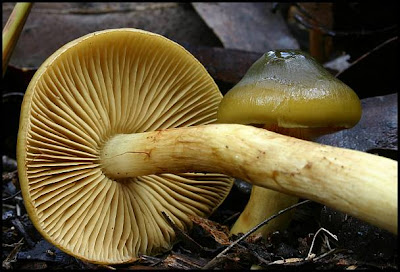 Broad, flat cap of an aging specimen - note the flattened dark green central umbo. The shade of green is variable. 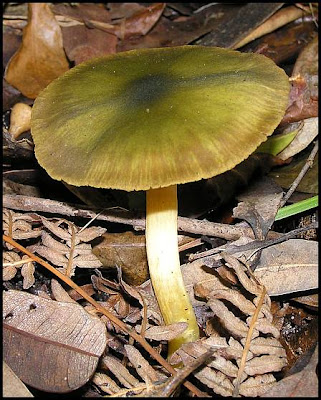 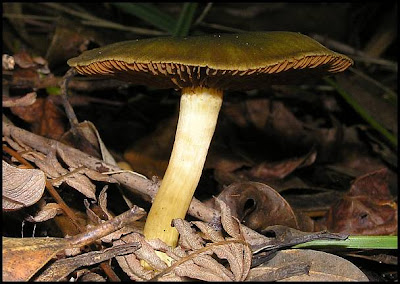 Notice the slight tapering upwards of the stem. 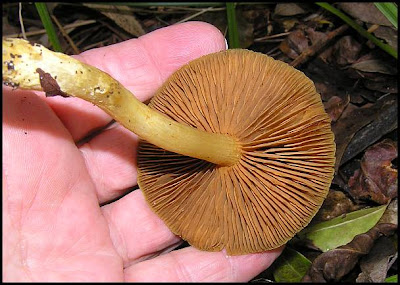 Hi Gaye
Sorry to be slow in commenting. Lovely post on this particularly beautiful fungus.
You helped me name mine, found at Nowra on 26 June. Your photos are beautiful.
I saw mine when the bush was dripping wet. It seems it likes those kind of conditions.
Strange to say a green fungus is attractive, but I find it so.
Cheers
Denis

thank you. I only hope in time to see more of these beautiful green fungi. There are blue fungi to find, too. Yes, strange colours for fungi, and strangely eerie.

With the forests you have close at hand, I imagine you are in prime fungi territory.

I like this fungus, which can range from bottle green to dull green-brown. Very subtle little organism.

I am very interested in Australian tinder fungi. There seems to be several that look alike with different names. Names don't matter much to me so long as I can recognise them.
But now I read on a Government site that Fomes Fomentarius grows in Australia, and I thought it was restricted to North America, England and Europe! Any info?
Regards, Le Loup.

sorry, I don't have any information on Fomes fonentarius, and whether it is in Australia. If I eventually find anything worth sharing, I will contact you via your blog.

I have found what looks like Fomes fomentarius on our property in the Central West of NSW, growing on the side of a eucalyptus.

I was searching the web trying to find out if they are native or not.

Fomes Fomentarius is not native to Australia as far as I am aware. This bracket or Horse Hoof fungus is native to the UK & America & is the source of the tinder Amadou or German tinder.
We do have Polypores here though that are used as tinder for flint, steel & tinderbox fire lighting plus we have other plant tinders.
Regards, Keith.
http://woodsrunnersdiary.blogspot.com.au/

thank you for your interest and assistance with this. If I find any more reliable information I'll add it here.