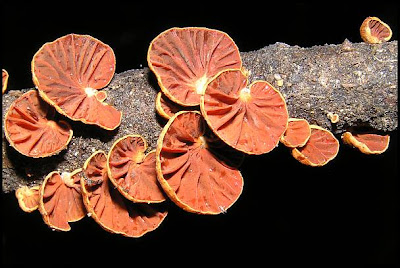 Anthracophyllum archeri, commonly known as Orange Fan, is from family Marasmiaceae, and grows on dead wood in native forests. Pronunciation is Anthrack-oh-fill-um archer-eye. It is a common fungus and can fruit at any time of year.
Caps are shell-shaped or fan-shaped, up to 35mm and are attached laterally to wood, occasionally with a very short stem, but my local observations have noted the absence of a stem. The upper surface of the cap is smooth and radially ridged, tan to light orange.
Smooth ridged upper surface of Orange Fan Fungi 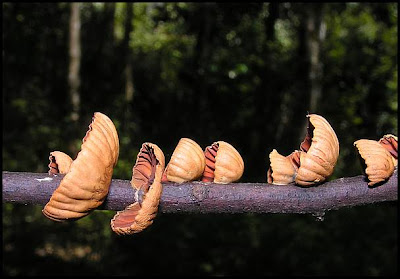 Gills are similar in colour but often darker, widely spaced and fan out in various lengths from the point of attachment. Fungi have a smooth leathery texture.

Orange Fan Fungi are usually seen in large numbers and can be spaced along a stick or log, or crowded forming overlapping clusters. The structure of the fan shape with widely spaced fold-like gills make Anthracophyllum archeri easily distinguished from other fan-like or shell-like fungi. 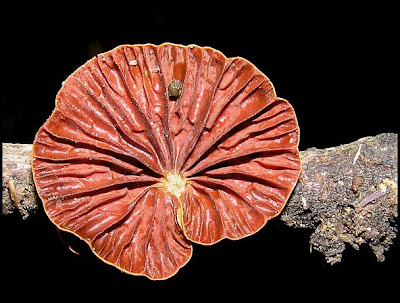 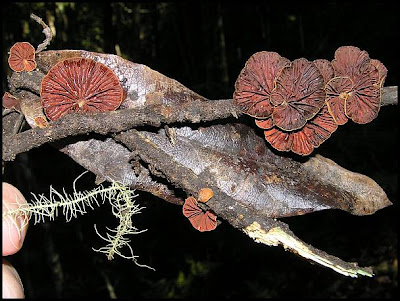 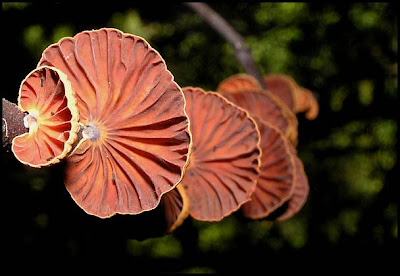 This pictures are amazing! What is the camera that you used? And are all of the photographed fungi on this blog native to only Australia? I have used this information for a school project which has me interested in mycology.

hi, and welcome to my fungi blog. Thank you for your comment.

My camera that I used for these photos is just a digital "point-and-shoot" with only 3.2 megapixels (Olympus C760).

I am pleased you were able to use some of my information for a school project and hope you persue your interest in mycology. It really is a fascinating and diverse subject.

hi Sara, and thank you.

As you are a keen gardener, no doubt you also find some weird and wonderful fungi creations while you happily work.

I apologise for the delay in posting your comment and responding to it, as I have been wandering around the bush over the other side of Australia for a few weeks. I found plenty of fascinating fungi growths.