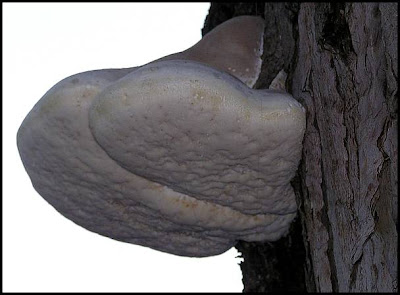 The polypore fungus, Laetiporus portentosus, commonly called White Punk, forms large, thick brackets on living Eucalypts. It causes white heart-rot to the host tree. I have seen it adhered to both smooth and rough-barked Eucalypts.
Brackets can reportedly reach 350mm wide, but I have only seen them to about 150mm wide. The upper surface of the fungus has a slightly 'velvety' texture and can be off-white, beige, to a warm 'biscuit' brown colour.
Notice the pock-marked under-surface which is riddled with tiny larvae 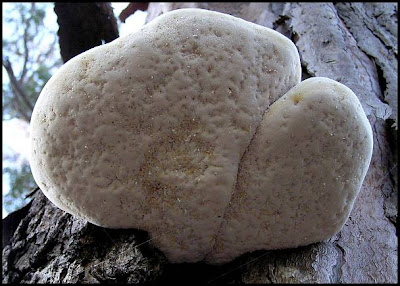 The fertile under-surface is covered in very fine pores, and is pale yellow or white when fresh, aging to a dirty white. Certain insect larvae feed on the soft flesh of the White Punk fungus creating a maze of tunnels with the old fruiting body of the fungus resembling a sponge in appearance.
When I first saw the soft white spongy structure attached to the trunk of a eucalyptus tree, I questioned if it could be a lichen. The old grey fruit bodies riddled with tunnels will eventually fall from the tree, sometimes following rain when it would collect water and become heavy.
A close-up of the fine pore surface. I will replace this unsharp image with a clear one if I can get one. The White Punk fungi are often high on tree trunks making close-up images difficult to obtain. 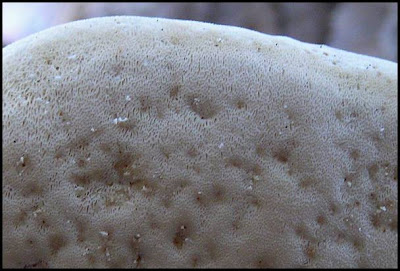 Dry, smouldering brackets were reportedly used by Aborigines to transport fire. Aborigines had many uses for various fungi. Spore print is white, although I have not attempted to obtain a print.

Although my images do not portray an attractive fungus, I have seen images of new Laetiporus portentosus fungi that show a smooth, quite aesthetically pleasing cluster. 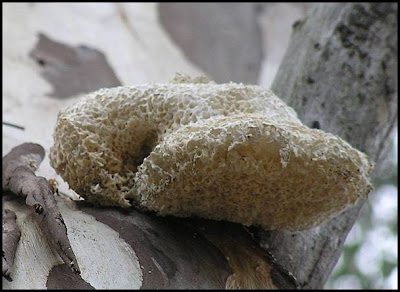 A close up of the soft-textured well-eaten White Punk 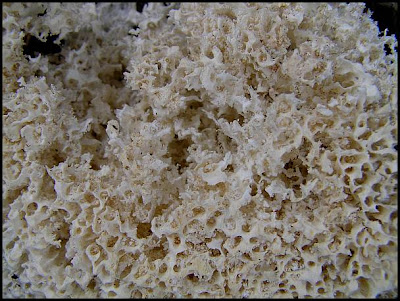 As the decayed fungus fruiting body ages further, it can become quite hard and brittle 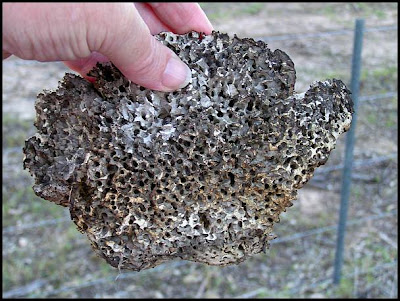 My sightings of Laetiporus portentosus 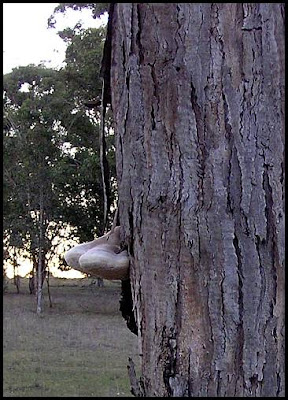 Hi Gaye, very interesting. I read your article link concerning aboriginal use of fungi and found the following that is related to Laetiporus portentosus:

>>What is probably this species of polypore, was eaten by Aborigines in Tasmania, possibly as an emergency food. In Tasmania, South Australia and Western Australia a fungus, sounding like this one, was used as tinder and to carry fire as it would smoulder all day.<<


Surprisingly, aboriginals often carried fire around with them instead of making it when they arrived at their new location. They had several methods of doing this, but I had not known of this fungal way.

hi Westy, it would make an interesting experiment to light one of the tunnelled old fruit bodies of the White Punk to see how long it smoulders for. I might try that when I find another one :)

Interesting discussion on the aboriginal uses of fungi.

Did you follow the story of of "Otzi the iceman" the frozen body found in Autria in 1991 who turned out to be ~7000years old (it certainly made the press over here - Wikipedia has a good entry). Amongst other items he was carrying 2 types of fungi. One was for firemaking. His use for the other seems to be a matter of debate but one suggestion is that it was for medicinal(antibiotic) purposes.

Keep up the good work

Here is an extract from the link above regarding Ötzi the Iceman, Frozen Fritz, a well-preserved natural mummy of a man from about 3300 BC (53 centuries ago), found in 1991 in a glacier on the border between Austria and Italy.

"Among Ötzi's possessions were two species of polypore mushrooms with leather strings through them. One of these (the birch fungus) is known to have antibacterial properties, and was likely used for medicinal purposes. The other was a type of tinder fungus, included with part of what appeared to be a complex firestarting kit. The kit featured pieces of over a dozen different plants, in addition to flint and pyrite for creating sparks."

hey, im a 15 year old, live in rural NSW near wagga wagga. All my life we have harvested this fungi from tree tops and cut it into cubes, and then soaked it in kero for about one month. Once it has been soaked, you light it on fire, and what we do is throw it around, it burns with such a low heat you can pick it up in you'r bear hands. We also use it as fire lighter, as a 10cm cube will burn for about 1 hour.
i had never heard of the aboriganals using it, but i guess that was were our family tradition came from.

thank you very much for sharing your experiences of this fungus as a fire-storage object - your accounts of this are very interesting, and I am sure they will be of interest to many other readers.

I have one here that grows in our forest which looks very similar, but I thought it was Ryvardenia Cretacea. Could I have the wrong name, or does the one you show not grow here in the Armidale NSW area?
Regards, Le Loup.

You will find that Ryvardenia cretacea is a thinner fungus (ie; not as bulky), and is browner on top. It would grown in the Armidale area. I have done some fungus hunting in the New England NP - it's a great place for fungi.

Often find myself revisiting your blog, lovely pics of white punk (one of my favorite wood decay fungi)would just point out that my understanding is that Laetiporus causes Brown rot rather than White rot, and as such it plays an important role in the ecology of many animals that use larger hollows for habitat.

thank you for your comment. I haven't got much information on this, but I'll try to look into this.

Thank you for the info Gaye, much appreciated.
Keith.
http://woodsrunnersdiary.blogspot.com.au/

My Grandfather who lived on the Murray River collected these for us when we were kids. He would soak them in a fuel mix of kerosene etc. and then when we came up on school holidays he would remove it, light it up and we would play soccer with it for about 1/2 hour until it was all gone. Not PC but awesome fun when you are 10 or 12 years old.