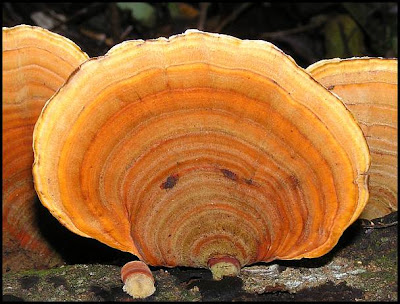 Stereum ostrea, Golden Curtain Crust, is a leathery shelf fungus belonging to family Stereaceae. Pronunciation Steer-ee-um Austria. This common fungus often makes a spectacular, long-lasting, massed display. It is found in many parts of the world, and internationally it is known as 'False Turkey Tail'.
It is found on dead wood (fallen or standing) in wet native forests, and its Australian distribution includes the eastern coastal and mountainous areas from north Queensland, through NSW, Victoria and Tasmania.
Attractive concentric zones and soft leathery texture 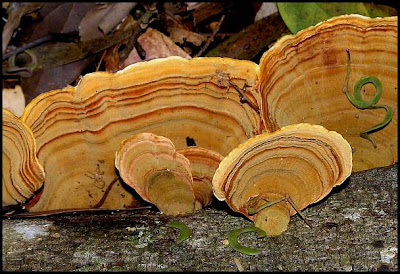 Fruiting bodies are broadly attached to the substrate, either singly or often fused laterally forming overlapping rows and commonly colonising whole logs, remaining fresh-looking for months. The thin shelf, fan or funnel-shaped fruit-bodies are only about 2mm thick with concentric (circular) bands or zones of yellow, orange and many shades of brown, usually with a pale wavy margin. Brackets can be up to 100mm, or more, in diameter.
The upper suface of fruit-bodies feels ridged but smooth, and 'velvety' with very short hairs. Stereum ostrea has a smooth underside which distinguishes it from the somewhat similar Trametes versicolor which has pores on the underside. Spore print is white. I have not successfully obtained a spore print of Stereum ostrea.
Fused fruit bodies form overlapping rows of 'shelves' 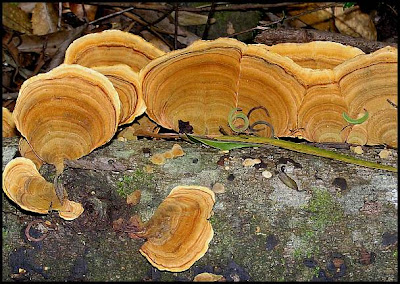 Smooth but lumpy lower surface of Stereum ostrea can be white, yellow, orange or gold. Illustrated in the image, fruit-bodies can be adhered to the underside of logs with only the fertile underside visible. All fungi surfaces here are the lower surface. 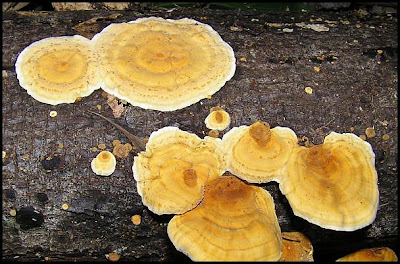 The sun shines through the thin leathery fungi 'fans' and highlights the orange circular bands. Notice the narrow band of cream lining the margin, which is a feature of Stereum ostrea. 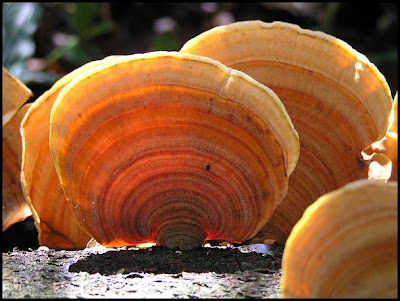 My sightings of Stereum ostrea

A massed display of Stereum ostrea 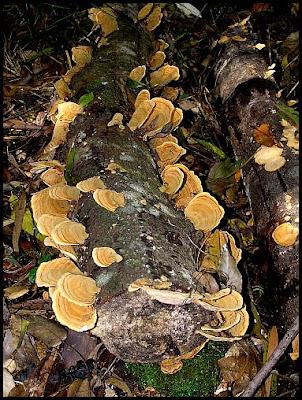 Yet another one of your inestimably excellent illustrated articles on Australian fungi. I am sure that this fungi blog is a valuable resource to others interested in the subject.

Keep up the good work!

Hi Gaye, I have something similar, although only coin size and predominately purple and browns. Very pretty though.

Thanks for the info
Jack

thank you. I don't expect my blog to be of use to those who have technical experience in the field of mycology, but I hope it will be of use (in time), or at least interest, to amateur fungi observers and enthusiasts.

your species could possibly be Stereum illudens, but of course, there are more possibilities.

As the leathery shelf fungi are one group that often survive the drier and warmer months, I intend to check out a few and will post some as I identify them.