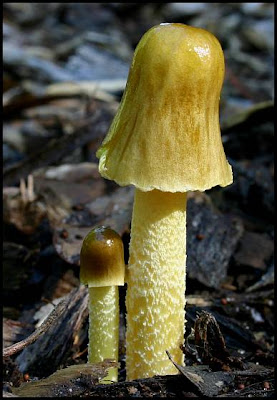 Bolbitius vitellinus, Egg-yolk Fieldcap, from family Bolbitiaceae, is commonly found on fertilised lawns and rich organic material. Pronunciation is Boll-bit-ee-uss vit-elle-line-uss.
Appearance can be very variable, but the yellow slimy 'button' emerging is a readily identifiable feature of Egg-yolk Fieldcaps. Young caps can be distinctly bell-shaped, but more often are egg-shaped or round. But yellow caps are always viscid (slimy or sticky).
Caps dry out very quickly, expanding to become broadly convex (domed) or bell-shaped, eventually flattening and fading to off-white or beige. The flattened caps can also exhibit variations, some with a shallow central depression, and some with a slight umbo (domed central swelling).
These cap variations can make identification of mature specimens difficult, but one more feature that is always present and will help identification, is the marginal striations (furrows or lines) on the faded cap. Mature caps will be smooth, dry and shiny, but can vary in size from 15mm to about 50mm.
Egg-yolk Fieldcaps at different stages of maturity: right is a young yellow, slimy, newly emerged convex fungus cap; left is an umbonate cap that has lost its stickiness and most of the yellow colour; and centre is a mature flattened cap showing yellow gills. Notice the fine vertical striations on the rim of the left specimen, and the dry cap edge of the centre sample showing striations - this is an important identifying feature. 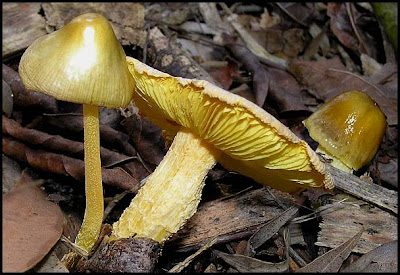 Height and thickness of the stalk of Bolbitius vitellinus is also variable, and can range from 30 to 120mm high with a diameter of 3 to 10mm. The stalk is hollow, and both the stalk and the young cap are fragile and will crumble easily if disturbed.

The yellow stalk is distinctively 'powdery' or scaly, and my observations indicate that this scaliness remains as the fungus ages.

Distribution of Bolbitius vitellinus, according to FungiMap of Royal Botanic Gardens Melbourne, includes eastern NSW, eastern and southern Victoria, Tasmania, southeast SA, and SW Western Australia from about Perth to Esperance. The main fruiting period is April to August.

Note that the middle of the three fungi has a slight central depression in the mature cap, and all stages of maturity feature some degree of 'scaliness' on the stem 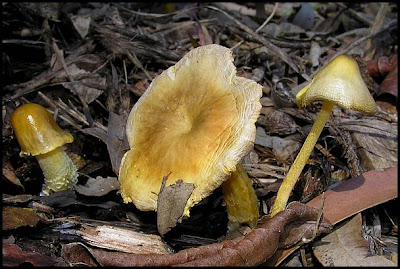 Gills age from a pretty yellow to a dirty yellow (below). I obtained a rusty-brown or cinnamon-brown spore print. 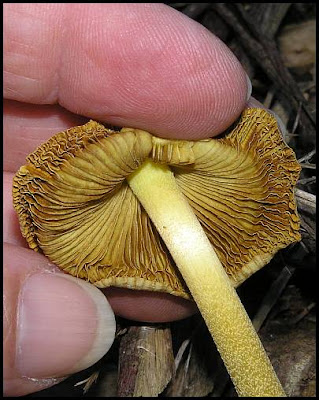 This image illustrates the variation in size of mature Egg-yolk Fieldcaps with a slender cap 15mm wide with thin stalks up to about 80mm high, while others I saw had larger, thicker caps and were up to 50mm wide with short stumpy stems. 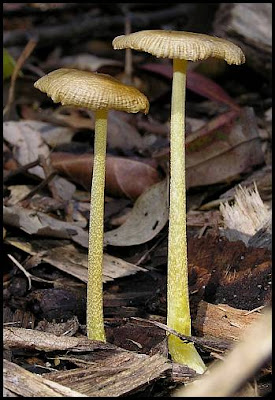 Hi Gaye, another excellent topic. Your Bolbitius vitellinus looks very like the one I have, particularly the scaly stipe. Does the same species also occur in WA?

I had forgotten to include distribution, so thank you for your question. I like to provide as much information as possible.

I have now added distribution to my entry. Bolbitius vitellinus is apparently found in the Esperance region. I would be very interested to know if your finds are the same fungus, and to know the substrate of your specimens, please.

As the 'usual' substrate is reported to be fertilised lawns or organic material (even dung), then it sounds most unlikely for it to grow in the sand of your surroundings.

I'd be pleased if you could add your findings of this species here at some stage.

Hi Gaye, mine were growing in a low lying area in peaty sand, so not the poor white sands that dominate my region. Moisture levels would be retained for much longer too, which suits this longer lasting species.