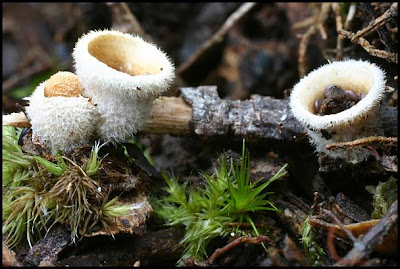 From appearance only, I have tentatively identified this tiny Birds Nest Fungi as Nidula emodensis. Birds Nest Fungi are cup-like structures that break open to reveal tiny packages called peridioles that contain reproductive spores. Drops of rain land in the 'nest', displacing the peridioles. My Fungi Blog entry #3 Cyathus stercoreus describes this facinating process in more detail providing links to more information.
I have been unable to find much information on Nidula emodensis in addition to my observations, but will add to this entry if I do.
Nidula emodensis with tiny brown peridioles 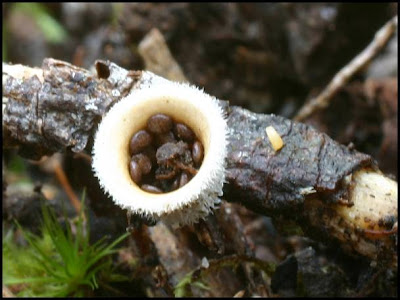 The fungi were up to 6mm in diameter, with cream 'shaggy' exterior and smooth, ungrooved pale orange-brown interior. A juvenile fungus in images 1 and 3 appears to be shedding an orange-brown 'cap'. The smooth brown peridioles were less than 1mm in size, and the three specimens were growing on a dead twig.
My sightings of Nidula emodensis

New England National Park, NSW - In alpine woodland on a dead twig - May 07. 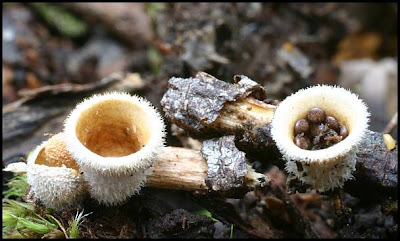 Hi Gaye, you sure have some cute fungi over your way. I can't recall ever seeing any around Esperance, do you know if the Birds Nest Fungi occur in this region.

distribution details within Australia are proving difficult to find, relating to many fungi. It appears as if there is not a great amount of work done on this.

One of my books (Common Australian Fungi - A Naturalist's Guide by Tony Young) states that two species of Birds Nest Fungi (Cyathus stercoreus and Crucibulum vulgare) occur in WA, but it does not specify which area of WA.

Really, this is one of the reasons I am endevouring to keep recordings of location etc for my fungi finds, to broaden the recorded knowledge. Although my identifications, in some cases, are not 100% determined, I am hoping that my observations and photographs will be of some use in the field of mycology at some stage.

Contact Tom May in Melbourne (of fungimap). I'm sure he'd be interested and may be able to help with an ID (or direct you to someone who could).

thank you, and yes, Tom May has been able to assist me in the past. Fungimap is an interesting project.