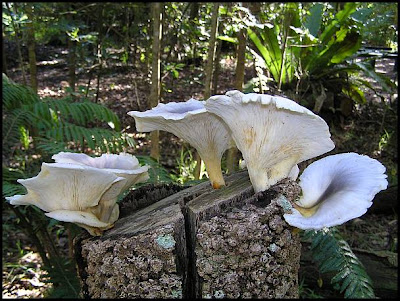 Omphalotus nidiformis, Ghost Fungus, belongs to the family Marasmiaceae. Pronunciation Omfa-lotus nidee-form-iss. This is Australia's most well-known luminous (glow-in-the-dark) fungus, but not only does it make a spectacle at night, it also makes a lovely show by day.
A newly emerged Omphalotus nidiformis fruiting body 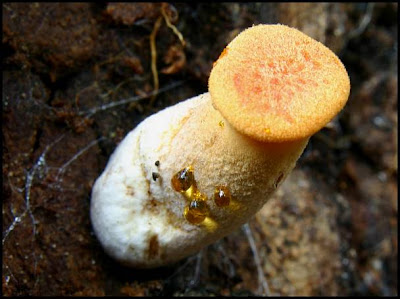 Developing quickly to form a 'funnel' in the cap 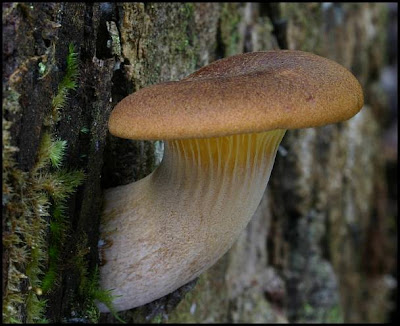 Losing orange colouration in cap and gills as it matures 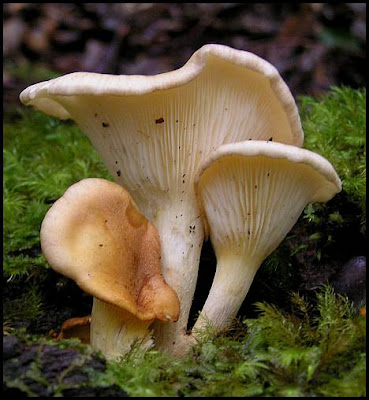 These funnel-shaped fungi flatten out with age and can reach a diameter of 200mm. They are found on living and dead wood, both native and exotic, and can often be found in gardens and parks. If sprouting from the ground, there will be wood below the ground surface. The colour of the cap can vary from white or cream with blue and black centre and yellow tinges, to tones of purple and pink.

Gills are deeply decurrent (extending down the stem), are cream to white, and various lengths. Spore print is white. The stem can be central, off-centre or even lateral (attached at side), dry and up to 80mm in height or very stout.
Ghost Fungi can grow singly or in extensive overlapping clusters. Luminescence is due to a chemical reaction between fungal enzymes and oxygen. The soft lime-green glow is an amazing sight in natural surroundings at night.
Distribution has been recorded as south-east Queensland, eastern NSW, Victoria, Tasmania, south-eastern SA, and south-western WA. 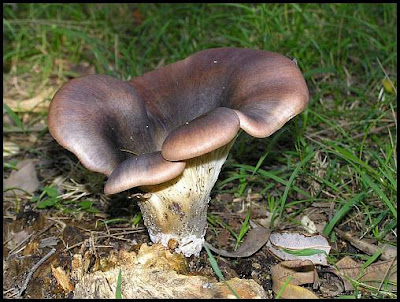 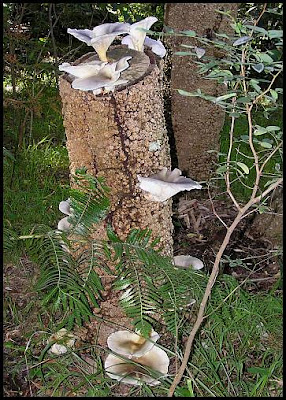 I found some at MONA museum (in Tasmania) this morning and picked them thinking they were oysters. Thanks to your blog I did a glow in the dark test and witnessed, to my utter horror and delight, the bioluminescent glow! Wow! In America, where I'm from, oyster mushrooms have no poisonous look a like. I am SO glad I double checked. They are beautiful but won't be part of dinner tonight. Thank you :)

Hello, and I'm glad my blog information and images have been of use. They are truly amazing glowing green at night.

your great website helped me avoid getting ill yesterday when I mistook these for oyster mushrooms! I found a couple near Nelson Bay, and was amazed to see them glow in the dark.
Thanks, Peter

Gday just witnessed my first ghost fungi near bellingen by the river .what a treat .

Truly amazing, at first I thought a glowing green in my garden had dropped from outer space. No, it is fungi. I am in Coffs Harbour and we have had a bit of rain of late after a very dry summer. And yes I leave timber to rot in my garden. This fungi is a white colour, very beautiful. I will inspect it in the morning light more closely. Thanku for your info site. Marg de