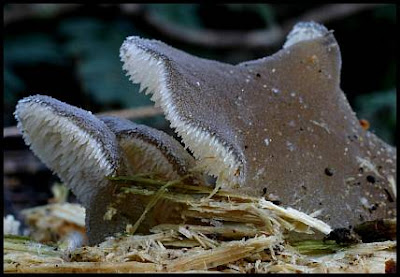 Jelly fungi are intriguing growths. You need to have a keen eye and make a close inspection of most fungi to really appreciate their intricate beauty and marvelous structure.
Pseudohydnum gelatinosum, Toothed Jelly Fungus, family Exidiaceae, is a beautiful thing. Pronunciation: Sue-doh-hid-numb gelat-in-oh-sum. They are found on rotting wood or living trees in wet forests in southeast Queensland, eastern NSW, Victoria and Tasmania.
Toothed Jelly Fungi 30mm wide. 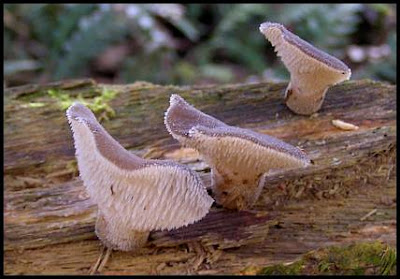 Fruiting bodies are usually tongue or fan-shaped, grey to brown, and quiver when touched. The upper surface of the young fungus has a texture similar to a tongue, becoming gelatinous (slimy) with age. I have seen Toothed Jelly fungi up to 80mm wide.
The lower surface is covered in white pointed tooth-like projections up to a couple of millimetres long. If a stem is present, it will be short and wide.
A close-up of the fertile underside of the fungus 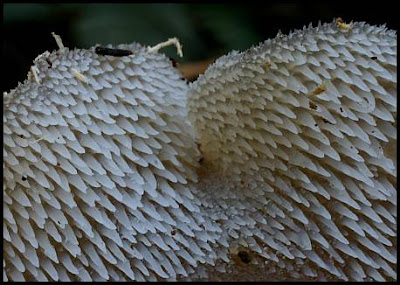 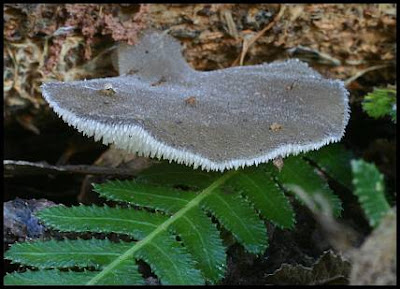 Toothed Jelly Fungi grow singly or in overlapping clusters. The upper and lower surface is soft to the touch which distinguishes it from other grey or brown shelf fungi that have firm spines. As they age, they collapse into a brown glutinous blob, as shown in the image below. 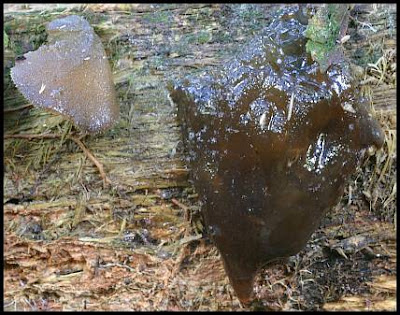 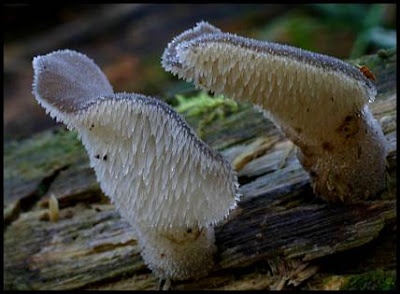 I had not realised that jelly fungi came in such regular and complicated shapes. The ones I have seen, only produced flat elongated lobes that went in various directions. Are these more complicated structures in the same family?

Jelly fungi are fascinating. And yes, the jelly fungi with more definite and complicated shapes do belong to a different family to the 'simpler' structures. But there is also more than one family of more definite shaped jelly fungi.

Another family of jelly fungi with more definite shapes is Auriculariaceae. I have found two species of these here and they are a fabulous find.

Like botany, am only beginning to understand why certain growths are separated into families.

The simple antler-like and dot-like jelly fungi that you mention belong to the Dacrymycetaceae family, and are very diverse in shape. It is interesting to know that you have found some of these in the west. I have also seen these here.

The soft folded convoluted shapes of jellies (like the 'brain' jellies) belong to the Tremellaceae family. I have seen white and yellow species here.

Went frogging last week for a few days, and it is certainly fungi season. Fungi was everywhere, and I even found the fungi eating Giant Panda Snail (largest snail in Australia).

Here is a pic of a coral fungi (my first!) that I found at Copeland a couple days back:

I have never been to the Copeland area of the Barringtons, and I must remedy that.

Your coral fungi is great. Identification is extremely difficult though. I have several coral fungi pics (red, mauve, yellow, red/white, brown, cream, white), with little hope of identifying them.

Your snail find is very exciting - I checked out your picture. I'll be doing some reading up on it. I have found two snails in the Barringtons - one small flat round one (about 12mm - Williams River), and a an empty conical shell (about 50mm - Burraga Swamp).

Re: your question about fungi season, Evan:

Quoting from one of my books "Fungi Down Under - the Fungimap Guide to Australian Fungi" by Pat Grey and Ed Grey:

"Each species has its own set of favourable environmental conditions for producing fruit-bodies, mainly related to moisture and soil temperature. In temperate Australia, fleshy fungi appear mainly from March to July. Heavy falls of rain in autumn, while the soil is still warm, can produce a flush of diverse fungi in large numbers. The peak of the season is earlier in wetter forest and later in the drier woodland areas."

Considering the severe drought here, our autumn rain is not too bad. Local (roadside, paddock and reserve) fungi is very minimal as yet, which is quite different from two years ago. It will be interesting to see how the fungi season progresses here.